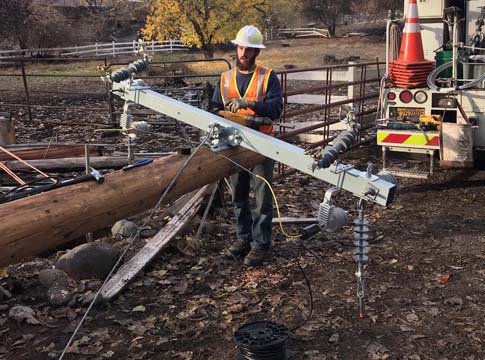 Three EWEB line crews on Tuesday marked their 15th straight day working to restore electric service to the thousands of people victimized by the Camp Fire that struck northern California on Nov. 8.

The crews are part of a nationwide mutual aid initiative to rebuild the electric system in and around Paradise and restore service to those affected. At one point, an estimated 20,000 residents were living without power. Many of those lost their homes to the fast-moving fire.

The fire resulted in 85 confirmed deaths and the destruction of almost 14,000 residences.

"It was an amazingly devastating event," said Scott Mehlbrech, a Line Crew Lead II who visited the crews last week. "I've never seen anything like it and it's hard to find the words to describe the destruction."

The 13 EWEB line technicians are working 16-hour shifts and are based at a makeshift camp in the Chico area that serves as a temporary home for line crews from as far away as Florida and Hawaii.

Electric utilities in the United States have mutual assistance agreements to help one another rebuild power lines and poles after disasters in order to connect homes and businesses to the electric grid as soon as possible.