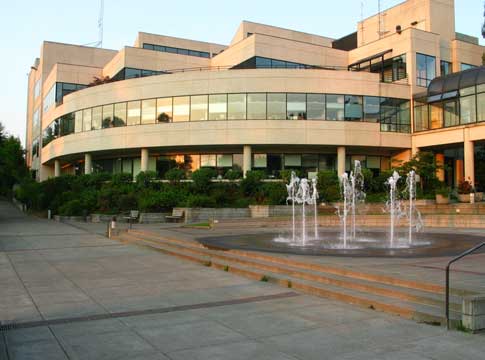 After evaluating several proposals and opportunities, EWEB is focusing its negotiations to sell the former riverfront headquarters property to the City of Eugene. The exact terms and details of the deal will be negotiated during the next few weeks.

“We’re pleased to pursue negotiations with the City of Eugene on this property that is vitally important to the whole community,” said EWEB General Manager Frank Lawson. “Having the City as a potential buyer provides the opportunity to achieve a City Hall and consolidate city services with significant savings to the community. Based on the City’s plan, only minor changes to the building are required, making the City’s vision inspiring, practical, and achievable.”

This step toward a final sale of the 4.4-acre property arrives after years of outreach and a thorough public process to sell both EWEB’s headquarters buildings and the rest of EWEB’s former riverfront property.

In 2007, EWEB partnered with the city and other community stakeholders on the Riverfront Master Plan that was completed in 2010. The plan charted out improvements for an area that once held storage yards and other equipment facilities and is now home to the riverfront park and will feature many homes and businesses. In 2018, EWEB declared the former headquarters property surplus.

Then, last spring, EWEB developed and issued a rigorous request for proposals (RFP) process that drew significant public attention to the site. After the RFP process didn’t produce a buyer, EWEB’s five-member elected Board of Commisisioners granted authority to the general manager to negotiate and execute the sale of the property.

All the proposals submitted by community organizations, developers and other entities offered different types of community value. The City’s proposal would offer the smoothest transition and the greatest community value.

Partnering with the City for the final piece of this riverfront property offers a unique opportunity to make possible a City Hall located on the shores of the Willamette River and adjacent to the burgeoning riverfront neighborhood. The plan also allows the City to consolidate services at a significant savings to the community.

Under the City’s proposal, EWEB will be able to maintain a shared customer-facing space for paying utility bills and similar needs.