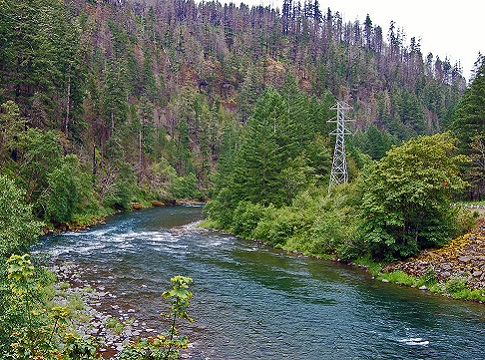 Owned by EWEB since 1994, Stone Creek is a small but mighty hydro generation project on the Clackamas River approximately 45 miles southeast of Portland. Historically the facility has been operated and maintained for EWEB by Portland General Electric, but in late 2019, PGE notified EWEB that they would no longer operate the plant due to changes in their corporate strategy.

Stone Creek is a run-of-the-river project capable of producing 12 megawatts of power. For reference, EWEB's largest owned power source, the Carmen-Smith Hydroelectric Project on the McKenzie River, has a capacity of 114 megawatts, enough electricity to power 16,000 homes per year.

"Though a relatively small generation facility, Stone Creek has consistently provided positive revenues to EWEB customers and is a reliable producer of carbon-free, local hydropower for Eugene and the region," said EWEB General Manager Frank Lawson.

With the operations and maintenance contract between EWEB and PGE about to expire, EWEB Commissioners at the May 5 Board meeting, approved two separate agreements that will keep Stone Creek providing clean, reliable power to EWEB customers.

The first is a five-year Intergovernmental Agreement (IGA) with Energy Northwest to operate the hydroelectric plant and the transmission line running from the plant to EWEB's Harriet Lake Substation. The second agreement is a 10-year contract with Portland General Electric to operate the transmission line that ties the Harriet Substation into PGE's Oak Grove Substation, where the output from Stone Creek ties into the regional grid.

"I'm probably one of the few people that remembers when this project was initiated," said EWEB Commissioner Dick Helgeson, who represents customers in South Eugene Wards 2 and 3 and is a retired EWEB executive with 32 years prior utility experience. "In my experience, this has been one of the better small hydro projects that EWEB has invested in over the years."

Hydroelectric plants are carbon-free generation resources. Because it's fueled by water, the Northwest's hydropower base does not produce air pollution or greenhouse gas emissions. Nearly 80 percent of Eugene's power comes from hydroelectric projects.

Decisions such as retaining the Stone Creek project are part of EWEB's ongoing Electricity Supply Planning effort, a process that helps utilities understand the resources, technology, and infrastructure that will be needed to meet customers' future electricity needs.

"The most significant decisions confronting EWEB in the next decade involve sources of supply," said Frank Lawson. "We are looking at factors such as climate change and evolving customer expectations, and making generation resources choices that not only meet today's needs but also provide flexibility for serving our community under a variety of future conditions."

Watch a short video clip of Frank Lawson describing some of the benefits of the Stone Creek Project.