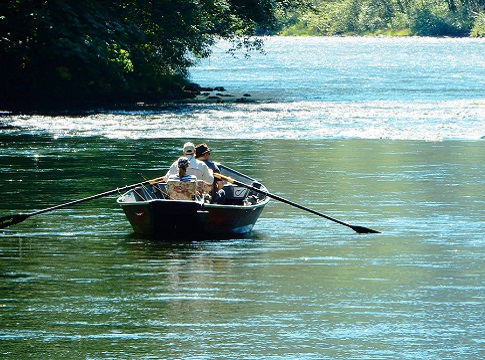 The beautiful McKenzie River not only supports diverse recreation, vibrant farms, and abundant fish and wildlife, but it is also the sole source of drinking water for Eugene residents and a source of clean, reliable and affordable energy.

Hydropower is a form of renewable energy that uses water stored in dams, or flowing in rivers, to create electricity. Falling or flowing water spins a turbine, activating a generator that converts the energy into carbon-free electricity, which is then fed into the electrical grid to be used by Eugene homes and businesses. Nearly 80 percent of Eugene's power comes from hydroelectric projects throughout the Pacific Northwest.

Under operating licenses issued by the Federal government, EWEB is permitted to divert a portion of the McKenzie River for power generation. The Walterville hydroelectric project is allowed to divert 2,577 cubic feet per second (cfs) into the Walterville canal and EWEB is required to maintain minimum instream flows in the bypassed reach of the McKenzie River of 1,000 cfs at all times.

However, in 2018 EWEB made an operational decision to voluntarily adjust the flow going into the Walterville canal during low flow years in order to maintain an additional 10 percent more flow in the river during the summer. Maintaining more flow in the river than in the canal improves fish migration and enhances water quality and recreational use during the summer months.

In mid-April, EWEB conducted our annual evaluation of snowpack data and summer stream forecasts and projected the McKenzie Basin will experience below-median stream flows during the upcoming summer. Data available at that time indicated that snowpack in the basin was roughly 94 percent of median. McKenzie River streamflow forecasts for the April to September period at Vida (the closest forecast station) were 92 percent of average.

Based on these forecasts, EWEB will begin adjusting flows into the Walterville canal following the annual Walterville Project maintenance outage that is currently scheduled for June 13-26, and will maintain the adjusted flows through October 2020.

"Our community's hydro projects place EWEB in a unique position to safeguard this valuable community resource," said EWEB generation manager Mike McCann. "Whether it's managing stream flows or partnering with community members to keep pollutants out of the river, we're always working to create a balance between watershed health and human use."

The Walterville powerhouse, located off Camp Creek Road northeast of Springfield, can generate up to 8.5 megawatts of electricity, enough to power approximately 4,000 homes or roughly equal to about 3 percent of Eugene's average daily consumption of electricity.