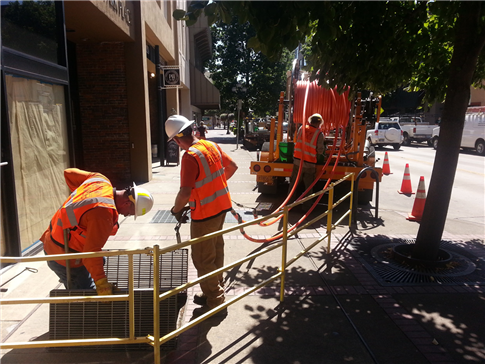 In today's economy, high-speed fiber is critical infrastructure, not unlike roads and railways. We've partnered with the city of Eugene, Lane Council of Governments and the Technology Association of Oregon to design and construct an open access, low-cost, high-speed municipal broadband network throughout the Eugene downtown business district.

The project, partially funded through a federal grant provided by the U.S. Economic Development Administration, will serve approximately 120 buildings located in the downtown core with geographic expansion possible in the future.

The downtown fiber network will utilize existing conduit pathways located alongside our underground electric infrastructure. This allows installation of the new fiber network without the expense and disruption of tearing up city streets.  To date we have connected 13 downtown buildings, with many more in design.

Although we are still early in the project, the economic impact of the high-speed fiber network is already evident. One downtown business recently won a federal contract that stipulated that the company acquire a high speed fiber connection by a certain date. Upon the commitment from EWEB to meet that date, the company started hiring 40 new employees to work on this federal contract. In total, the partnership expects the creation of more than 200 new jobs by downtown businesses as a result of the new fiber infrastructure.

Recently, Nick Nevins, an EWEB engineer, and Anne Fifield from the city of Eugene, talked with MuniNetworks.org for a national podcast. As you can hear in the link, the interview touches on many different aspects of the project and the early benefits of this public-private partnership.