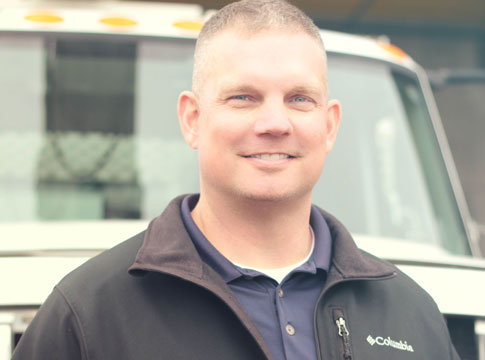 To talk about Brian, you have to employ superlatives. He is the friendliest, the nicest and the humblest of people. Walking through the halls of EWEB with him is like a flashback to high school. We all remember that kid that everyone knew and everyone liked-somehow knowing everyone's name and greeting each person he passes. At EWEB, that's Brian.

As a teenager, Brian would spend summers with his uncle in Hermiston.

"He was a lineman with Umatilla Electric Co-Op and I got to go on ride-alongs. It piqued my interest," recalls Brian.

After attending a year of college, Brian told his parents he wanted to leave and go to line school in Idaho.

"They had an early-out program. PG&E called and listed off locations in California I didn't know anything about. When they mentioned Oakland, I thought, that sounds good. Everyone made fun of me for it since I passed up all these fancy northern California cities, but it turned out great," says Brian.

Brian started with PG&E as a truck driver and quickly moved into a position as an apprentice lineman. In 1999, he was hired on with EWEB as an apprentice. After a few years, he moved to Bend taking a position with Central Electric Co-Op, but eventually found his way back home to Eugene and EWEB.

Since then, Brian has put in the hours and the effort advancing to Crew Leader II with EWEB's apparatus crews that work primarily on EWEB's downtown network.

The configuration of the downtown electric network results in ultra-high service reliability, which takes specialized equipment. The crews Brian leads perform the maintenance and technical work on that equipment.

"When I first started with the apparatus crew, it was completely new to me and challenging. The downtown network serves some really big customers, who rely on a high level of service. In the beginning there was a lot of maintenance work that hadn't been done in a while. We'd open vaults up and not know what we were going to be getting into," says Brian.

Brian is a glass half full kind of guy. It's easy to get the impression that he sees opportunity where others see obstacles and with his goofy, playful demeanor his enthusiasm for the work is infectious.

"It's been a pretty incredible opportunity to work in the power industry," says Brian. "You want to come see some of the equipment we work on?" And he grins.

Thank you Brian for your role in providing customers with vital services 24 hours a day, 7 days a week, 365 days a year.