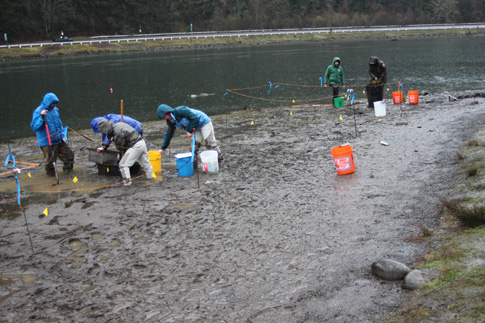 We are partnering this week with the Oregon Department of Fish and Wildlife, the U.S. Fish and Wildlife Service and other agencies to study methods to preserve young Pacific and brook lamprey during lake and reservoir drawdowns.

Lampreys belong to a primitive group of fishes that are eel-like in form but lack the jaws and paired fins of true fishes. Lampreys have a round, sucker-like mouth, no scales and gill openings. Lamprey are culturally significant for many Native American tribes in the Pacific Northwest.

When reservoirs are drawn down rapidly, biologists worry that young lampreys may not be able to "follow the water" quickly enough and could become stranded and die.

To help biologists and fisheries managers study methods to help lampreys escape de-watering situations, our Generation staff slowly lowered the level of Leaburg Lake. Juvenile and larval lamprey are known to live in the silt along the southeast shoreline of the lake, above Leaburg Dam on the McKenzie River, 26 miles east of Eugene.

"This is a unique opportunity for fisheries managers and biologists to study behavior during a slow drawdown," said Andrew Janos, an EWEB biologist. "What they learn could help them establish best practices for drawdowns at other locations in the Northwest."

Starting early on March 22, staff began lowering the level of the lake at a rate of 1.8 inches per hour. The slow drawdown continued until the lake level dropped by about 1.5 feet. The drawdown resumed on March 23, when staff will slowly lowered the lake another 1.5 feet.

We contacted state and federal fisheries managers in 2017 to begin working on the study. Over the next two to five years, we are planning to remove a portion of the significant silt build-up along the left bank of the dam to improve the upstream fish ladder passage for migrating salmon. Working with the agencies to conserve the lamprey larvae and juveniles during future silt removal operations is a high priority as we strive to be good stewards of the McKenzie River.

Pacific and brook lamprey populations have declined in recent decades, and biologists are looking for ways to promote the preservation of the species.