An In Depth Look at the Carmen Smith Hydroelectric Project 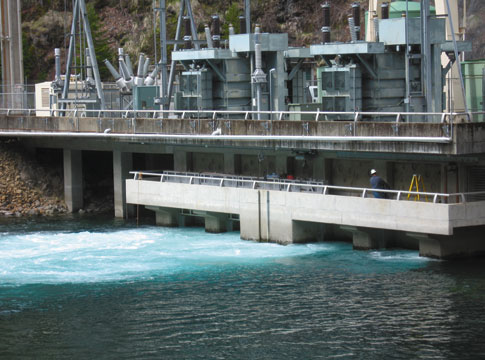 In November 1963, Oregon Gov. Mark Hatfield presided over the dedication ceremony for the newly completed Carmen-Smith Hydroelectric Project on the upper McKenzie River.

Dozens of buses transported curious residents up Highway 126 to take part in the celebration and to see this modern engineering marvel for themselves. A band played, picnic lunches were served and the plant, paid for with a $23.5 million bond, began operations. The project would become EWEB's largest source of locally generated energy, producing enough electricity to power 16,000 homes per year.

For more than 50 years, Carmen-Smith has reliably served our customers with low-cost hydropower. The plant remains valuable as a carbon-free generation resource that can ramp up and down to meet customers' peak energy needs. In other words, the Carmen-Smith Project operates as a system to store water overnight, and produces power during high usage times when we would otherwise be buying it on the wholesale market during those more expensive hours.

So, when the operating license for the project was set to expire, we started the intensive work necessary to acquire a new license from the Federal Energy Regulatory Commission (FERC). In October 2008, we were proud to announce that we had reached a Settlement Agreement with 16 partners representing fisheries and natural resource agencies, environmental groups, Native American tribes and recreation organizations. This negotiated agreement formed the basis for the license application.

Carmen-Smith is a network of three dams and reservoirs and two power-generating plants located just a few miles downstream from the headwaters of the McKenzie River. Understandably, the new agreement included significant habitat enhancements, campground improvements and more fish-friendly plant operations that would be undertaken as part of a new 50-year operating license.

The biggest ticket item was a "volitional" fish passage system at Trail Bridge Dam, the lowest of the project's three earthen dams. When EWEB signed the agreement, wholesale power prices were strong and were predicted to climb steadily over time, ensuring continued value to our customers despite the project's price tag.

But as the license application was under federal review, the Great Recession struck, sending power prices to historic lows. A glut of natural gas, fueled by the rapid rise of hydraulic fracturing, also known as "fracking," sent power prices spiraling by 70 percent even as the rest of the economy improved.

In 2016, the results of an updated financial analysis caused us to re-evaluate the project. The new analysis showed re-licensing costs to be over $200 million, while prices on the wholesale energy markets were projected to remain at near-record lows. With new energy pricing forecasts, the future for Carmen-Smith as an economically viable energy resource appeared bleak. We hit the pause button and formally requested that FERC delay issuance of the license.

Fast forward to today. We recently submitted a modified Settlement Agreement that addresses the economic realities of the region's energy markets, while honoring its original commitment to environmental and recreational enhancements at the project.

"Getting this far into a hydro relicensing process, and then attempting to renegotiate the Settlement Agreement was not a simple or easy decision to make," says EWEB's Project Manager and lead negotiator Patty Boyle. "We are grateful that the parties to the Settlement agreed to come back to the table to explore alternative and creative solutions that ultimately reduced the financial risks to EWEB customers while preserving the environmental benefits of the project."

The new agreement retains major investments in habitat restoration, aquatic enhancement measures and recreational improvements. Modifications at the Trail Bridge Dam will enable Chinook salmon, bull trout and other fish to once again migrate into the uppermost reaches of the river. But instead of a complicated 'volitional' system that included an expensive downstream fish screen and upstream ladder as originally proposed, the parties have agreed to an alternative method of fish passage.

The new agreement calls for construction of a "trap and haul" facility, which uses attractive water flows to encourage migrating fish to climb a short ladder and enter a holding pool. Underwater cameras will be used to detect the presence of fish in the holding pool. Then, using water-to-water transfer, fish are lifted into a transport vehicle that will drive up and around the dam and release them into the Trail Bridge Reservoir. Fish can freely swim further upstream, and juveniles can travel downstream past the dam via an improved spillway system.

Constructing this fish passage facility means we will forego power generation from the Trail Bridge turbine, giving up a bit of energy production in exchange for a less costly, and less visually intrusive, fish screen.

A complete overhaul of the powerhouse refurbishment plan yields further savings. Instead of replacing both turbine/generator units, we will replace only one, while minimally refurbishing the second unit to ensure safe operations. And, instead of re-locating the substation off the river to reduce the risk of spills in the river, the substation will be re-built in its current location using environmentally-friendly transformer oil. Besides being a much less expensive solution, this strategy has the additional benefit of reducing disturbance to sensitive forested areas. Altogether, these actions reduce the capital investments by about $80 million and long-term operating costs by about $1 million per year.

Building for the future

Powerhouse refurbishment work has started at the Carmen plant with a major project to replace the two failing turbine shut-off valves.  The power tunnel/penstock system will be dewatered so that the general contractor, Wildish Building Co., can begin demolition activities shortly after the new valves arrive from the fabrication plant in Italy.  This work represents the start of multiple years of construction at the plant.

"Planning and design work for the next phase, reconstruction of the substation facilities, is also underway and progressing well," says Mark. The powerhouse overhaul is anticipated to take about five years.

While we don't have a new license in hand, we are operating the Trail Bridge plant in a manner that improves fish passage now, recognizing that our partners have waited many years to see these benefits come to fruition.

From March through June, approximately 350 cubic feet per second of water is being released down the spillway to aid the out-migration of threatened juvenile spring Chinook salmon. Additional gravel will be placed in the two river reaches above the power house and in the Carmen -Smith spawning channel to improve critical habitat areas for Chinook salmon and bull trout.

In addition to environmental enhancements, a major component of the re-licensing agreement involves improvements to the area's recreational facilities, as the three reservoirs are popular fishing spots. We will rebuild two existing campgrounds, improve day-use areas, and remove dispersed campsites that are located in areas that could pose a public safety hazard.

Another recreationally-focused improvement put in place ahead of the license issuance is a half-time United States Forest Service Protection Officer. EWEB is paying for this new position to help ensure safety for recreational users and enforcement of fishing regulations that protect native, threatened and endangered species.

Even with the significant savings afforded in the new agreement, the overall project economics are just about break-even over the life of a 40-year license.

"It's impossible to predict where wholesale energy markets will be in the future and get it right," says Patty. "If our conservative financial assumptions hold true, Carmen-Smith is still dicey from an economic perspective, but that doesn't mean relicensing isn't the right move for EWEB."

There are numerous noneconomic benefits of retaining ownership of this project for EWEB. First, Carmen is operated as a carbon-free peaking power plant, helping us meet our greenhouse gas reduction goals.

Then there is its location near the headwaters of the McKenzie River. Nearly 200,000 area residents rely on the McKenzie for their drinking water. In our role as an electric and water utility, we are heavily invested in protecting the watershed for drinking water quality. Having a physical presence at the headwaters and maintaining local control of that facility is consistent with our watershed stewardship role.

The value of local generation is another benefit, particularly as we consider the potential of a Cascadia Subduction Zone Earthquake or other regional disaster.

Carmen is one of three EWEB-owned hydroelectric plants on the McKenzie River. Resiliency is a key strategic priority, and local generation is an essential component of that plan. We are working on building a 'resilient spine' in our electric transmission system. The idea is to enable us to move power from local generating resources to critical facilities, such as hospitals and public safety agencies, in an emergency. With about 110 MW of capacity, Carmen-Smith plays a significant role in this concept.

In 1963, Carmen-Smith was a source of immense community pride. Its construction represented great strides in engineering and technical advancement in the field of energy production. Looking forward, our investments will demonstrate how to balance the community's desire for clean energy with our responsibility to protect and enhance native and endangered fish populations for future generations. With the help of our partners, this can be Carmen-Smith's lasting legacy.