We are currently experiencing technical difficulties with our outage reporting system.

Our team is actively working to fix the issue. If you are experiencing a power outage, please check our Outage Map to see if it has already been reported. To report a power outage that does not appear on the map, please call 541-685-7000, select option 2 and follow the prompts. 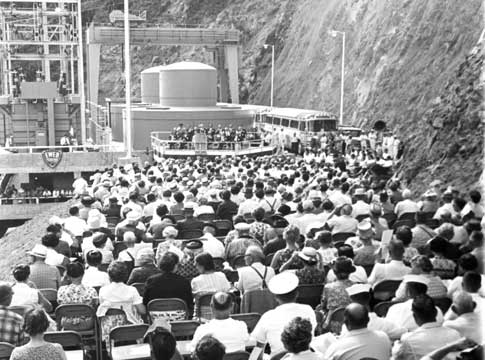 For more than 50 years, Carmen-Smith has reliably served Eugene with low-cost hydropower.  The plant remains valuable as a carbon-free generation resource that can ramp up and down to meet customers' peak energy needs.  In other words, Carmen operates when our community needs power the most and when buying that power on the wholesale market would be most expensive.

This initial agreement provided major habitat enhancements, campground improvements, and fish-friendly plant operations including a fish passage system at Trail Bridge Dam.  These significant investments were agreed to at a time when wholesale power prices in the region were strong and projected to persist or even rise.

Since 2010, while the license application was under federal review, regional wholesale power prices shrunk by 60 percent, making the 2008 settlement agreement uneconomic. EWEB and the original settlement parties were able to successfully request a pause in the federal license review and go back to the table to revise the agreement.  This revised agreement will be formally adopted by the EWEB Board on November 1 and submitted to the Federal Regulatory Energy Commission by the end of the month.

The revised agreement still includes many investments in habitat restoration, aquatic enhance measures and recreational improvements that are now balanced with the economic realities of the regional energy markets.  Fish passage will be accomplished by alternative method, using a "trap and haul" facility and spillway fish passage.  EWEB will no longer generate power at the Trail Bridge powerhouse, giving up a bit of energy production in exchange for more cost effective less intrusive fish passage.

Altogether these revisions are expected to reduce capital investments by about $80 million and long-term operating costs by $1 million annually.

With approval of the revised agreement, Carmen-Smith can further forge a balance of our community's desire for clean energy with our responsibility to protect and enhance native and endangered fish populations for future generations.