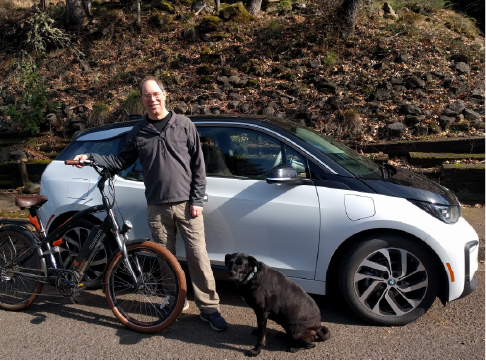 Intrigued by the possibility of saving money on vehicle fuel and maintenance with an electric vehicle (EV), our family leased a Chevrolet Spark EV in 2016. This car has an 80-mile range, which was fairly typical for an EV in 2016, and we intended it as the in-town commuter vehicle while we continued using a gas-powered companion for long-distance travel.

As a long-time purchaser of inexpensive vehicles with 4-cylinder engines, I was surprised to find, for the first time, that I owned a car that was fun to drive. I don't generally drive for fun, but the "zippiness" of the Spark EV, thanks to the innate characteristics of EV engines and drive trains, provided an unexpected amount of satisfaction.

When the lease ended, we reluctantly surrendered Sparky and initially considered upgrading to the vehicle that replaced it in Chevrolet's electric line-up, the Bolt. After our successful experiment with the electric Spark, we were ready to invest in an EV that could be used for everything: long-distance trips as well as the in-town commute.

The Bolt seemed to be a fine car, but we just weren't as comfortable in the seats as we had been in the Spark, and I was still somewhat nervous about recharging when traveling.

We settled on the BMW i3 with a range extender. The "range extender" is a very small gas engine that provides an extra 50-70 miles of travel if you need it. The rated all-electric range of the i3 is 153 miles, which is less than many 2019 EVs, but I liked the security of knowing I could always keep going with a stop at a traditional gas pump.

After our first 2,500 miles of use, we have put 1.8 gallons of gas in the tank and even that was mostly avoidable. The range extender primarily functions as a security blanket.

For both cars, we chose to lease for three years rather than making an outright purchase. While there are many factors in that decision, part of our thinking is that we want to take advantage of the rapidly increasing range of newer vehicles. Because of advantageous leasing terms, the i3 was actually less expensive to lease than several EVs that have lower sticker prices.

A bit before acquiring the BMW i3, the family also became a one-car household. Like many families, we always kept two cars, one for each adult. But in 2019 we acquired our first electric bicycle, a Magnum Cruiser. It turned out that with an electric bike for commuting we no longer needed two cars.

While an EV saves money on fuel and maintenance, those savings pale in comparison to the financial benefit of substituting the acquisition cost of an electric bike for that of a car. And no car insurance!