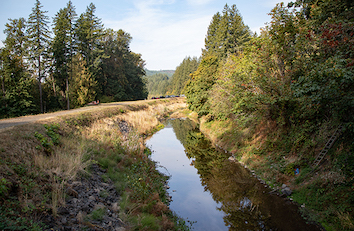 EWEB is moving forward with analyzing four options to remediate the Leaburg Canal, ranging from full decommissioning to complete restoration, with two options in between.

Changes are needed on the Leaburg Canal, which was built in the 1920s, because of increased seepage and internal erosion of the canal embankments that was discovered in 2018. Since then, EWEB has operated the canal as a stormwater conveyance facility, and it has not generated electricity.

During the entire process, safety has been EWEB’s top priority, for both the community and local residents near the canal.

In late 2019, EWEB started a comprehensive assessment of the canal to better understand the level of investment that would be required to ensure long-term safe and reliable operation. EWEB is currently working with consultants to conduct a Triple Bottom Line (TBL) assessment to analyze the financial, environmental and social impacts of multiple repair alternatives for the canal – a process that will be ongoing throughout 2022.

Four alternatives have emerged that EWEB will study in further detail. The alternatives range from full decommissioning to a complete return to service, and each prioritizes the safety of EWEB employees and the community.

Alternatives 1 and 2 are the most expensive due to extensive construction and repairs required throughout the entire project and facilities. They represent the two ends of the spectrum. Alternatives 3 and 4 are middle-ground options that balance costs with benefits. The four alternatives will be discussed in greater detail during the upriver Board of Commissioners meeting, which will be held on Tuesday, April 19 at 6 p.m. at the McKenzie Fire & Rescue Training Center (42870 McKenzie Highway).

“While EWEB and our consultants continue to study the alternatives, we will carry on with prioritizing reducing near-term risk because safety is EWEB’s first priority,” said EWEB Generation Manager Lisa Krentz. “Those measures will include reversible canal configuration changes, such as isolating portions of the canal from the high-flow creeks, and canal-wide efforts, such as proactive removal of unhealthy trees that could fall into the canal during a storm and obstruct water flow.”

On April 5, the Board of Commissioners approved the purchase of two properties along the canal that recently became available on the real estate market. Both properties are adjacent to the canal near to where EWEB expects to be constructing risk reduction improvements in the future. Purchasing these properties will ease construction access to work on the canal, whether that work involves canal restoration or decommissioning.