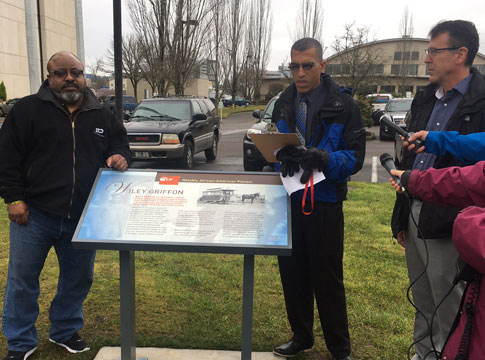 Wiley Griffon, among Eugene's earliest African-American residents, came to Oregon from Texas in 1891. In 1909, he purchased a small home on riverfront property near what is now East 4th Ave. and Mill St. in Eugene, immediately west of our headquarters building.

Despite an exclusion clause in Oregon's constitution that made it illegal for African-Americans to settle in the state, Wiley Griffon was a well-known and popular resident.

He became a driver for Eugene's first streetcar system - a mule-powered trolley car that rumbled up Willamette Street, carrying passengers from the Southern Pacific depot to 11th Ave., and east to the University of Oregon. Local children saved their pennies to buy a nickel ride on Griffon's trolley, and he often rewarded them with an easy smile, hard candy, stories and an occasional free ride home. The mule car line never thrived, and by the turn of the century it died out entirely.

Griffon took a series of jobs following the end of the trolley line, including janitor at the university dorm, restaurant worker, and waiter on a railroad dining car. At the time of his death in 1913, at age 46, Griffon was working as a porter at the Elks Club. The location of his grave in Eugene's Masonic cemetery, and the fact that the Elks Club paid for his funeral, indicate the great respect this African-American pioneer earned during his 22 years in a nearly all-white community.

To commemorate Griffon's home site and recognize the community respect he earned, we partnered with the Lane County branch of the National Association for the Advancement of Colored People to celebrate one of the city's first African-American residents to develop a historical marker.

"I'm really excited to move this story from oral tradition into a confirmed solid history for our community," said Eric Richardson, president of the local branch of the NAACP. "It's important to remember to look back at where we've been and how things have changed so we can continue to move the ball forward."

The dedication of the sign took place on Feb. 17, 2017, during Black History Month. The sign, photos and text are the result of the contributions of numerous community members and organizations, including the Lane County Historical Museum.