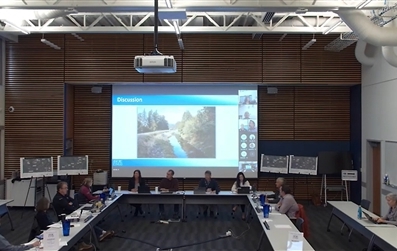 There’s no obvious right answer to the question of what to do about the Leaburg dam and canal. EWEB’s Board of Commissioners met this week for a work session with staff about the project. EWEB is required by federal regulators to address the structural deficiencies of the Leaburg canal. After initially studying 11 options, staff chose the four most feasible alternatives for comprehensive analysis. The options include full decommissioning, partial decommissioning, full return to service and partial return to service for the hydroelectric dam and canal.

All the choices are costly. Commissioner Sonya Carlson acknowledged that for some ratepayers, any increase in rates will be hard to swallow.

“We don’t have any good choices here. All of these have major cost implications. It’s going to be painful,” Carlson said.

EWEB staff prepared a triple bottom line assessment of the alternatives that looked at social, environmental and economic factors. For economic factors, we looked at the project cost (including its effect on rates), financing, and other economic issues. Environmental issues include climate, water and air quality, and fish and wildlife. Among the social issues staff analyzed were public safety, recreation, historic preservation, and tribal resources.

EWEB staff also gathered more than 400 public comments which will be presented to the Board next month. And commissioners weighed each alternative based on the triple bottom line values. EWEB Electrical Generation Manager Lisa Krentz told the Board each alternative came out with a net negative score.

“The decision comes down to choosing the least negative and recognizing that there are tradeoffs,” Krentz said. “Now please note that due to our mandate from the Federal Energy Regulatory Commission, doing nothing is not an option.”

The Board is not rushing this decision

EWEB General Manager Frank Lawson said he appreciates the weight of this decision.

“We want everybody, including the commissioners, to be comfortable and proud of this work. And it’s incredibly complicated and intertwined work,” Lawson said.

Lawson proposed that in December, staff would present a recommendation for a path forward which the Board can consider and share with interested parties including community groups for input. Commissioners decided to postpone their final decision.

“I always have this philosophy of better late than wrong,” said Commissioner John Brown.

EWEB is a customer-owned public utility with local control. The EWEB Board of Commissioners is elected by EWEB customers and serves the public without pay. As board members consider the future of the Leaburg canal, they rely on EWEB staff for information, analysis, and recommendations. But ultimately, these public servants will make the choice.

Public comment has helped EWEB understand more about the potential impacts of each alternative.

The next board meeting is Nov. 1.

Transparency is a key part of this process

EWEB is committed to keeping the community informed about the progress and outcome of this decision. That means open access to information and creating opportunities for all members of the community to express their views, needs, concerns and priorities.

In addition to more than 400 public comments that we have received so far, we have hosted several public board meetings and presentations, and we have an extensive website available so that our customers have full and open access to all information.

If you would like to learn more about this project and register your comments, check out eweb.org/LeaburgCanal. From the website, you can also sign-up to receive project updates via email.