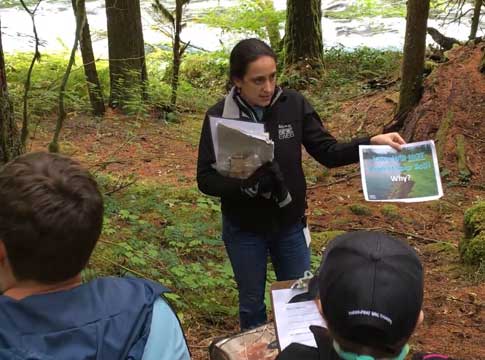 After an hour's ride up Highway 126, 30 excited middle school students spill from the bus steps and into the quiet of the upper McKenzie River watershed. Justin Demeter, McKenzie Watershed Council education coordinator and chairperson of the local Salmon Watch Steering Committee, greets the students and sets the stage for the time they will spend at EWEB's Carmen-Smith spawning channel.

"What you are about to experience is something so special, few people get the chance to experience it firsthand," Justin says. He states this at the beginning of each Salmon Watch field trip, and each time his sincerity is evident.

In the days leading up to the field trip, students have learned a little about the salmon life cycle and ecology and today they will witness the moment where the cycle both ends and begins again. Having journeyed for many months from the Pacific Ocean, adult Chinook salmon have arrived — at the location where they hatched — to lay their own eggs. After spawning, the salmon die, returning valuable nutrients to the freshwater ecosystem.

While at the spawning channel, the students rotate through four volunteer-led stations to gain a greater understanding and appreciation of salmon and the watershed.

On a short walk through the forest, along the river's edge, students consider the role the riparian area — or land next to a body of water — plays in a healthy watershed. They feel the soft thorns of the native nootka rose and imagine the path of a raindrop as it hits the the tree canopy, then the shrubs and smaller herbaceous plants, eventually making its way to the river.

On this particular day, Nancy Toth from EWEB's Source Protection Department brings her expertise and enthusiasm to the riparian station.

When asked why she commits her time to Salmon Watch, Nancy responds, "It's important we help the community stay connected to the watershed, not only to be good stewards for salmon and other wildlife, but in Eugene we rely on the McKenzie River for our drinking water as well."

Along the bank of the river, near the mouth of the channel, students gather around a table for the water quality station. Here, they test the water in the channel for pH, temperature, dissolved oxygen and turbidity. As they discuss the results the volunteer educator prompts them to draw conclusions around how the state of the riparian area might affect the water quality, and how both might affect the survival of the salmon. After a pause, someone throws out a partial answer, which another students builds on, and another, until as a group they develop a response.

Following the water quality station, the group moves on to fish biology where they focus on the star of the field trip. Walking along the channel wearing bright pink glasses glasses with polarized lenses to reduce the glare off the surface of the water, the students count salmon. About halfway up the channel, Kelly Reis from the Oregon Department of Fish and Wildlife points to a fish lying her on side using her tail to dig in the gravel.

"What do you think she's doing?" Kelly asks the students.

"Digging her redd," a few kids reply at once, seeming excited they know the terminology.

They continue walking, pointing out salmon to each other, until they reach the final station.

With the rush of the McKenzie as a backdrop, the students gather in front of small white basin containing river water, some debris and aquatic macroinvertebrates. The volunteer leading the station shows them how she collected the specimens by scrubbing the rocks along the the bed of the river, using a net to grab the small insects as they float downstream. The students begin poking in the water with plastic spoons and pipets, attempting to move each macroinvertebrate into a cell of an ice cube tray, after which they use a simple key to identify the species.

Watching the kids as they peer into the basins and try to figure out if what they have is a mayfly or a stonefly (it's almost always a mayfly), is a reminder of the power of experiential learning. A year from now they may not remember the details of what they learned today, but they might remember the spark of excitement they felt seeing that salmon dig her redd or the sense of discovery as they connected the concepts from one station to another.