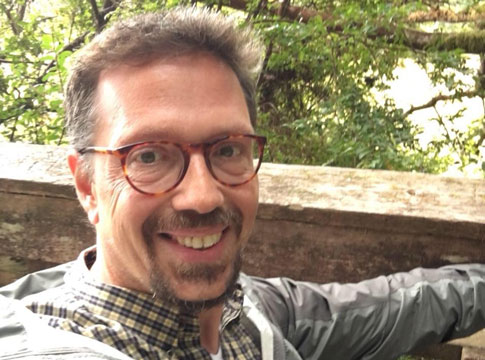 Chris describes a lot of his ten and a half years with EWEB as a "hoot," which seems especially fitting given Chris himself could accurately be described as a hoot. He is a smiling, laughing, downright jovial individual. All of that makes it near impossible to imagine him in the job he had prior to EWEB.

"I was in a job where I had to fire people all of the time. It was not fun," says Chris. "It's going to sound corny, but I remember when I came into EWEB for an interview, I almost had this child-like wonder of what a neat place it was. I had a sense that I really wanted to work here," he continues.

Like a lot of staff featured in our Powered by People profiles, Chris got his start with EWEB as a Customer Service Analyst and has worked his way around the utility over the years.

"When I started, I worked on the phones and in the atrium. Sometimes, I would get borrowed by credit and collections or email communications. It was an absolute blast. I'd show up and just go where I was needed."

Often EWEB forms horizontal teams to involve diverse perspectives when addressing problems or projects. It was on one of these teams that Chris first worked with his now supervisor, Sarah.

"I didn't know anything about risk management," says Chris. "But when a position opened up in the group, I knew I'd kick myself if I didn't take the chance. I had told myself if an opportunity came up to work with Sarah again, I'd take it. So I did a ton of research and I landed the best job in the utility."

When asked how he would describe that "best job" Chris boils it down to simple terms. "I help make sure we are making intentional decisions. That it's not just 'it's always been this way, so that's the way it is.' It's fine to take risks-just need to understand the potential consequences and how it could impact others."

In his role as an Enterprise Risk Analyst, Chris works with staff throughout the utility, not only spreading his knowledge and advice, but his good nature and sense of commitment.

"It's a great gig. There's tremendous value in knowing our collective efforts go into delivering on-demand electricity and high quality water. We juggle matching what we do with where customers find value too-whether it's in affordability or protecting the environment. An amazing amount of work goes into that. I have tens of thousands of bosses. It's really cool and I have every single intention in being here another 25 years. No doubts. I enjoy the heck out of my job."

Thank goodness, since all of us at EWEB find Chris is not only a hoot, but a blast and we enjoy the heck out of getting to work with him. Just passing the man in the hall will brighten your day.

Thank you Chris for your role in providing customers with vital services 24 hours a day, 7 days a week, 365 days a year.