We have been notified of fraudulent calls being sent to customers, falsely threatening an interruption in service. If you are concerned about your account status, please call our Customer Service team at 541-685-7000. Learn more about protecting yourself from scams. 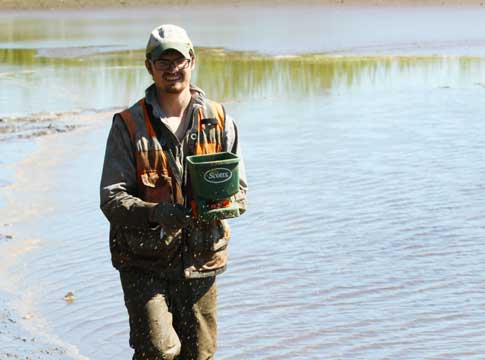 After almost two years of extensive planting to establish native trees, shrubs and wetland plant species at the Walterville Pond five miles east of Springfield, the conversion from a man-made pond to a naturalized wetland is nearly complete.

The restoration project started in 2014 to improve the natural habitat value while retaining the area's recreational benefits. EWEB built the pond several years after completing the Walterville Canal to store water to supplement generation at its Walterville Powerhouse. Use of the pond for power generation ceased several decades ago, but the utility continued to maintain water levels by pumping water from the adjacent canal. The 4-mile-long canal diverts water from theMcKenzie River to the power plant, located on Camp Creek Road.

In 2012, federal dam safety regulators classified the pond as a "high hazard" facility after concluding it could cause a breach or a potentially catastrophic failure of the canal embankment. The Federal Energy Regulatory Commission worried a rupture at the pond or the canal presented a public safety risk and the danger of significant property damage to the Walterville community, so EWEB at that time did some initial lowering.

In 2014, EWEB started loweringthe pond in increments twice a year with the goal of bringingit near the water level in the canal. The gradual lowering, coupled with a planting scheme that includes ash andPonderosa trees, along with native shrubs such as willow and dogwood, and native wetland species, allowed the warm-water fish and animals to adjust to a smaller pond while retaining the recreational and natural habitat benefits the area provides.

"By plugging, planting and seeding around newly exposed soil that appeared as the water level dropped, we are able to colonize the area with native plant species," he said, addingthat he's seen a greater diversity of animals make use of the area.

Federal regulators will inspect the pond this month and make a decision on the final water level. If they approve of the current pond elevation, EWEB will cease pumping, and the water level will remain high during the wet months and drop about 12 inches during the summer - much like a natural wetland.