Legislators get update on restoration projects on the McKenzie River 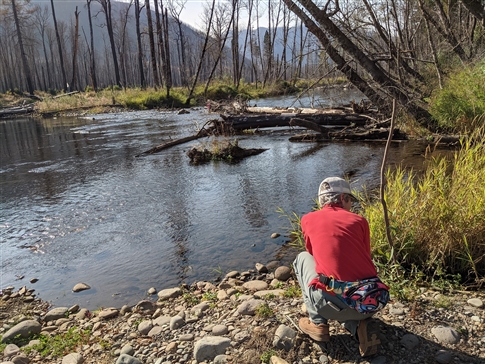 Rep. Nancy Nathanson (District 13) knelt by the slow-moving water of the McKenzie River on a recent Friday. She examined the shaded pools where salmon are now able to rest on their journey to spawn upstream.

Clusters of large, dead trees poke from the surface of the river. The trees slow down the water, allowing particles to settle to the riverbed, rather than wash downstream, where they could clog up EWEB’s water filtration equipment. Just over a year ago, this spot on the river didn’t exist. It’s part of a large-scale restoration project EWEB and partners have undertaken to protect the water of the McKenzie River in the wake of the devastating 2020 Holiday Farm Fire.

Nathanson and her colleague, Rep. Paul Holvey (District 8) toured the project at Finn Rock to see how much progress EWEB and our partners have made in just two years’ time.

Finn Rock Reach is owned by the McKenzie River Trust, which has been doing restoration work here for several years. Forest Service Biologist Kate Myer described phase I of this project as making the river messy again, like it was before industry tried to control it.

“This used to be like a tremendously productive area for fish & wildlife and we want to get some of that back,” Meyer said. “So it’s really about giving the water space, bringing that water table up, letting the river move around and play out its natural processes which is what these fish and wildlife have adapted to. We need those processes back in the system.”

Here, trees burned in the Holiday Farm Fire are placed in the river to slow it down and make shaded spots for salmon to rest. The salmon are coming back here to spawn. More every year.

"We’re finding these projects, because we’re making the wetted widths so large, these are actually (serving as) fire barriers,” Fricke said. “We have our project up at Deer Creek, and there was a fire up there, they actually used the stage zero project as a line to fight the fire from. So, adding to that fire resiliency, climate change resiliency, drought resiliency all of it is, more of these co-benefits that these can provide.”

“And it's also especially encouraging to see that the partnerships and the collaboration was around a project, not around an organization. So, the public funding is really maximized,” Nathanson said.

EWEB and the McKenzie River Trust are joined by the McKenzie Watershed Council, and the U.S. Forest Service in this project.

The groups are careful with their funding whether it’s from grants, customers, or tax dollars. Rep. Holvey dedicated $325,000 to McKenzie watershed restoration from funds that each lawmaker was able to dispense – funding that filled a shortfall at a crucial moment for the project. He said it’s heartwarming to see how the funding is making a difference.

There is still more work to be done. Phase II of the project will include improvements to gravel ponds on the Finn Rock property to help restore native pond turtle habitat.