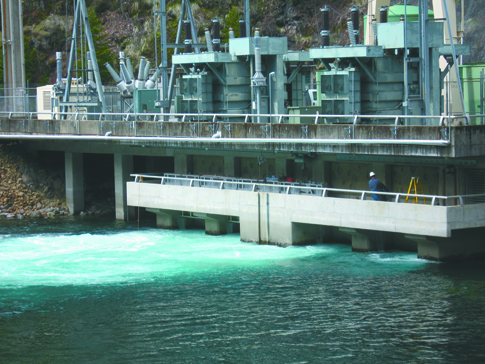 The Eugene Water & Electric Board has received a new 40-year operating license for our largest utility-owned generation facility - the Carmen-Smith Hydroelectric Project on the upper McKenzie River.

The new license, issued by the Federal Energy Regulatory Commission, will allow us to operate the carbon-free, renewable hydroelectric facility through at least May 2059. The project generates enough electricity to power nearly 16,000 homes.

"We are thrilled to receive this new license and our team is looking forward to continuing to modernize the facilities at the project," said Patty Boyle, principal project manager for EWEB.

In anticipation of the new federal operating license, we started a major rebuild of the Carmen Powerhouse in 2017, replacing and refurbishing much of the equipment first installed in 1963 when the project opened.   Last year, we replaced two giant turbine shut-off valves that measure 9 feet in diameter and weigh more than 26 tons. In April, we started a complete rebuild of the Carmen Substation, including the replacement of substation transformers weighing more than 66 tons each. In 2020 and 2021, we will replace the turbine runners (the propeller-like structures that spin with water pressure) and generators at the powerhouse.

"The issuance of this license initiates a substantial investment in the project along with many environmental and recreational improvements," Boyle said. "We'll be investing in fish passage facilities, improving spawning habitat and rebuilding three campgrounds."

Over the next several years, we will spend more than $116 million on upgrading the powerhouse and substation, rebuilding the three campgrounds (Ice Cap, Trail Bridge and Lakes End) in addition to other recreational, environmental and habitat improvements.

Carmen-Smith is a carbon-free generation resource known as a "peaking plant" that allows us to ramp up and down to meet customers' peak energy needs. It is one of three EWEB-owned generating facilities on the McKenzie River that supplies reliable electricity for our customer-owners.

Carmen-Smith is a network of three dams and reservoirs and two power-generating units located 71 miles east of Eugene. The Carmen Diversion Reservoir, filled by the McKenzie River flowing from its headwaters at Clear Lake, has minimal storage capacity and is used to divert water into an 11,300-foot-long tunnel leading to Smith Reservoir. From Smith Reservoir, water is routed through a second, 7,325-foot-long tunnel to the Carmen Power Plant, which discharges into Trail Bridge Reservoir, and then flows through the Trail Bridge power plant and back into the McKenzie River below Trail Bridge Dam.