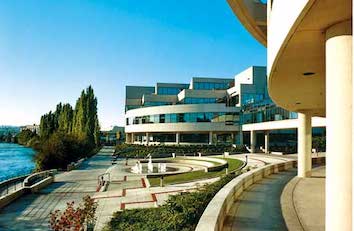 Community organizations, property developers and others will soon be able to submit offers to purchase and develop a 4.44-acre site in a prime location along Eugene’s burgeoning downtown waterfront district.

The site formerly housed the Eugene Water & Electric Board’s headquarters. The available property represents the northern portion of the Downtown Riverfront Special Area Zone, which is in the process of being transformed by Eugene’s Urban Renewal Agency into a vibrant commercial and residential district.

“This is a fantastic opportunity for someone or a group to create something that will benefit the Eugene community for decades to come,” says EWEB General Manager Frank Lawson. “Of course, as a public utility serving the people of Eugene and nearby communities, we will do our best to fulfill our desire to have the future uses provide ongoing community value, while also ensuring that the finances of the sale pencil out for our customer-owners.”

At the south end of the Downtown Riverfront zone is the former EWEB steam plant. The City of Eugene purchased the steam plant from EWEB in 2018 and is working with a development team to revitalize the historical landmark. In between the steam plant and the headquarters will be a 3-acre park along the Willamette River and a 1-acre public plaza, along with hundreds of homes and commercial space.

“This is another great milestone for the Downtown Riverfront project and for fulfilling the community’s vision of creating an accessible riverfront district and community destination,” says City of Eugene Director of Planning and Development Denny Braud. “The former EWEB headquarters buildings sit opposite the soon-to-be revitalized steam plant, providing strong anchors for the north and south ends of the project.”

The vision for redevelopment of the whole stretch of property was sketched out as part of the EWEB Riverfront Master Plan, which was finalized in 2010 after consulting with hundreds of community members under the guidance of a Community Advisory Team.

“The revitalization of the Downtown Riverfront is bringing new life and economic vibrancy to the whole city of Eugene,” says Eugene Chamber of Commerce President and CEO Brittany Quick-Warner. “This sale of EWEB’s former headquarters represents the final portion of an ambitious project that we have been involved in since the start of the robust and thorough community involvement process. I’m confident that local developers, businesses, nonprofits and other organizations will respond to this call for proposals by assembling a host of strong, financially solid projects that will benefit the whole community, and I look forward to seeing what ultimately happens at the site.”

Interested parties will be able to submit proposals via a formal Request for Proposals process that will open during the second quarter of 2022. EWEB staff and commissioners are still developing specific criteria for scoring proposals, but, in general, proposals will be rated based on community impact, economic benefit for EWEB's customer-owners, the intended use, conditions and contingencies, and the proposer’s qualifications to execute the project.

The site at 500 E. 4th Avenue includes three developable parcels with two buildings constructed in 1988 totaling approximately 100,000 square feet. The property is in a designated HUD Opportunity Zone and may be subject to preferential tax treatment.

The location is immediately adjacent to foot and bicycle paths and the DeFazio Bridge, and it’s close to Skinner Butte Park, Alton Baker Park, the University of Oregon and popular commercial and retail hubs at 5th Street Public Market and Oakway Center.

In the last five years, EWEB has consolidated nearly all employees and operations at the Roosevelt Operations Center in West Eugene to improve efficiency and productivity, making the headquarters building largely unnecessary. The remaining employees – a small number of administrative and customer service staff – will move to the Roosevelt Center by the end of the year.