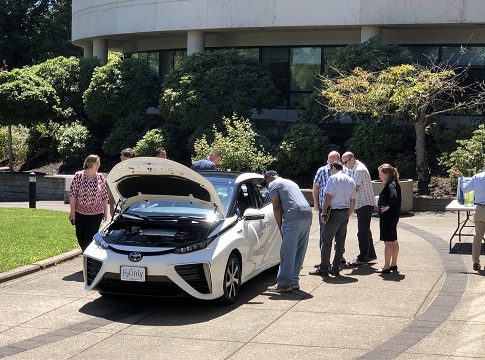 EWEB is interested in renewable hydrogen because of its potential to help decarbonize energy sectors and provide resiliency in the event of a large-scale disaster in the Northwest. Earlier this month, the utility hosted a Hydrogen Roundtable that was organized by Congressman Peter DeFazio's office. The event showcased a Hydrostar solar-power electrolyzer and a Toyota Mirai, a hydrogen fuel cell passenger vehicle.

In spring time here in the Pacific Northwest, we often find ourselves with an oversupply of low cost, carbon-free hydro and wind energy. With no market for the energy, power generators are turned off, resulting in a lost opportunity for carbon-free energy, and hurting the economics of these green projects.

At other times of the year, typically mid-winter for heating loads and late summer for cooling loads, energy demand exceeds supply and generators run at capacity. Sometimes even that isn't enough, and utilities like EWEB import electricity into our region, largely from coal and other carbon-intensive resources located to our east. Most of EWEB's electricity-linked carbon footprint comes from purchases made by Bonneville Power Administration during these periods.

In order to decarbonize the energy sector and address the climate crisis, utilities need a way to capture excess energy and save it for when it's needed. While solar and battery storage systems are great for short-term daily cycles, deep decarbonization requires long-term energy storage that can bridge across the seasons, and function in different energy sectors, such as transportation.

Using excess renewable power generated when wind, water and solar are plentiful, electrolyzers split water molecules into hydrogen and oxygen. Hydrogen produced from this process can be stored for future use, to help address the winter heating or summer cooling peaks, when capacity might be an issue, and it can be turned back into electricity if needed. It can also be used in the natural gas system, as a transportation fuel and as industrial feedstock for making fertilizer.

There are additional benefits to renewable hydrogen from a resiliency standpoint. Following a large scale regional disaster, the Southern Willamette valley might find itself isolated and on its own for a period of weeks or even months. Renewable hydrogen fuel cells can operate water pump stations and emergency drinking water wells. And because fuel cells are roughly twice as efficient as internal combustion engines, they can operate for significantly longer periods without refueling, compared to standard emergency generators.

The green hydrogen market is still in its infancy, especially in the Northwest. While hydrogen vehicle fueling stations can be found in California and in British Columbia, there are none in the area between. But EWEB is participating in renewable hydrogen discussions and partnerships because we see both the need and the potential.

In 2018, EWEB joined the Renewable Hydrogen Alliance as a founding member to further explore and facilitate opportunities for the advancement of hydrogen's development as an alternative fuel. EWEB is now one of eight utility members in RHA, with the others being Douglas County PUD, Fortis BC, Klickitat County PUD, Northwest Natural, Tacoma Power, Puget Sound Energy, and Portland General. EWEB plans to continue hydrogen development discussions with others in the region as the technology matures.

If you are interested in learning more about renewable hydrogen and its potential uses here in the Pacific Northwest, listen to a recording of the Aug. 1 Hydrogen Roundtable. The roundtable, which kicked off with remarks by General Manager Frank Lawson and Congressman DeFazio, included speakers from EWEB, Northwest Natural Gas, Oregon State University, the Columbia-Willamette Clean Cities Coalition, Toyota and the Renewable Hydrogen Association (RHA).