Just as high winds with gusts of more than 30 mph arrived in the Oregon Cascades early Thursday, EWEB has completed aerial trimming around its Carmen-Smith transmission line using a helicopter with saw attachments to trim branches and treetops.

The trimming protects power lines from trees and branches during wind and snow storms, increases reliability and mitigates the potential for wildfires during the summer months.

The Carmen-Smith transmission line is a vital connection to EWEB's electric distribution system and the Bonneville Power Administration's transmission system. The line allows generation from the Carmen project to get onto EWEB's system and serve customers in Eugene and the McKenzie River Valley, or onto BPA's transmission network to be marketed to electric utilities across the West.

Carmen-Smith, about 70 miles east of Eugene on the upper McKenzie River, is EWEB's largest utility-owned generation source and can power more than 16,000 homes.

By using a helicopter, EWEB was able to limit ground disturbances in the 17-mile-long transmission corridor, which runs through the Willamette National Forest. Aerial trimming provides easier access to trees in remote, mountainous terrain that is difficult for tree crews and their equipment to traverse.

"And tying up three crews for that long would take them away from other important work in town the in the McKenzie Valley," Nate said. He added that not only was the company the low bidder, but it also had the best safety record, "so it worked out really well for us."

Wright Tree Service, EWEB's vegetation management contractor, trims about 300 "line" miles each year, in addition to another 250 "line" miles in areas at greater risk for wildfire.

Heli-Dunn, based in Medford, was the low-bidder on the contract and won the $125,000 job. The company uses two primary tools: A vertical shaft with eight, 30-inch-diameter saw blades attached to it to trim horizontal branches, and a tree-topper that uses two hydraulic grappling claws to hold the tree while a chainsaw blade does the cutting. 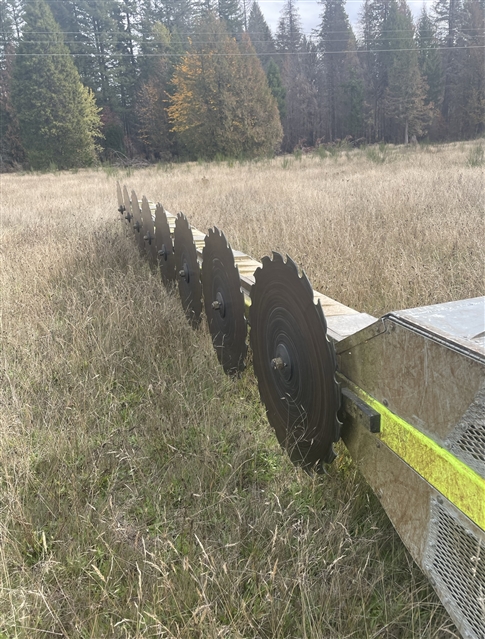 "The topper is great for handling fire-damaged trees," Alexander said. "It can cut up to at least 24-inch (diameter) treetops."

By using a helicopter, EWEB was able to complete the work in about seven days. Heli-Dunn worked mostly afternoons in late October to avoid morning fog, Alexander said. The company completed the job - trimming about 12.5 miles of the 17-mile transmission line - on Oct. 25.

EWEB is likely to employ the less expensive and faster aerial trimming in other areas of its service territory in the future. And with climate change bringing hotter, drier summers and longer and more intense wildfire seasons that limit when ground crews can prune, aerial trimming will become more popular.