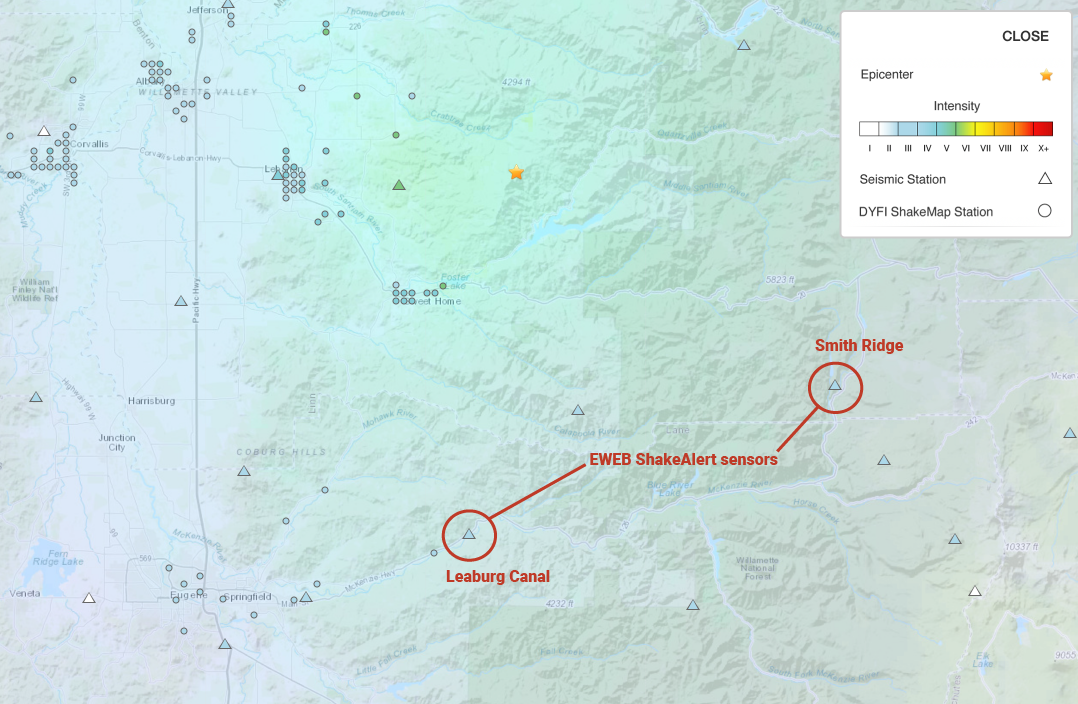 Today EWEB joined over 44 million organizations across the nation in the Great ShakeOut – the world’s largest earthquake drill.

The event is an important reminder of what to do during an earthquake: Drop, Cover, and Hold On. But getting through an actual earthquake is only one step of many to be prepared for one.

EWEB is preparing for earthquakes by upgrading our facilities to modern seismic standards, building emergency water stations in case an earthquake disrupts our ability to supply water for the people of Eugene, and partnering with the ShakeAlert program to monitor our hydropower facilities at Leaburg and Carmen-Smith.

Working with the Oregon Hazards Lab, EWEB installed seismometers at the Leaburg Canal and on Smith Ridge above the Smith Reservoir. These sensors measure acceleration from seismic events, allowing EWEB to contribute information to the Pacific Northwest Seismic Network (PNSN), the foundation of the ShakeAlert early warning system. EWEB also benefits from sensors installed throughout the region, receiving advance ShakeAlert warnings of seismic events that could impact our facilities.

At the Leaburg Canal, the seismic sensor incorporates an accelerometer which sends local ground motion data to PNSN’s analytic servers. These servers use the data to instantly determine the epicenter location and magnitude of the seismic event. Potentially damaging events then trigger the release of ShakeAlert warnings. EWEB is developing control systems capable of using these ShakeAlert warnings to take automatic protective action, such as opening or closing gates to reduce water levels in our water retaining canal facilities. ShakeAlert also sends alerts based on ground motion data from the broader regional network at large in a predictive manner to help EWEB operators understand the implications of a far-away earthquake on EWEB facilities.

This month’s 4.4 earthquake near the Green Peter Reservoir north of Sweet Home is a good example of how ShakeAlert helps EWEB’s generation facilities. Within seconds (8.8 seconds, to be exact), the ShakeAlert system sent our operators messages estimating how that earthquake’s shaking would propagate across the Calapooia watershed on to the McKenzie Valley to affect our facilities.

According to the ShakeAlert report, Eugene and our upriver facilities would have felt shaking ten seconds after the earthquake began and at only a two on the Modified Mercalli Intensity Scale (MMI) – a descriptive indicator of earthquake intensity based on peoples’ felt experiences of shaking during the event. An MMI of two is “Weak,” and “Felt only by a few persons at rest, especially on upper floors of buildings.”

“Our local emergency managers called EWEB to check in on the status of our facilities,” said EWEB Generation Engineering Supervisor Mark Zinniker. “The ShakeAlert contour map was really helpful to show them that the amount of shaking was not significant to our facilities.” 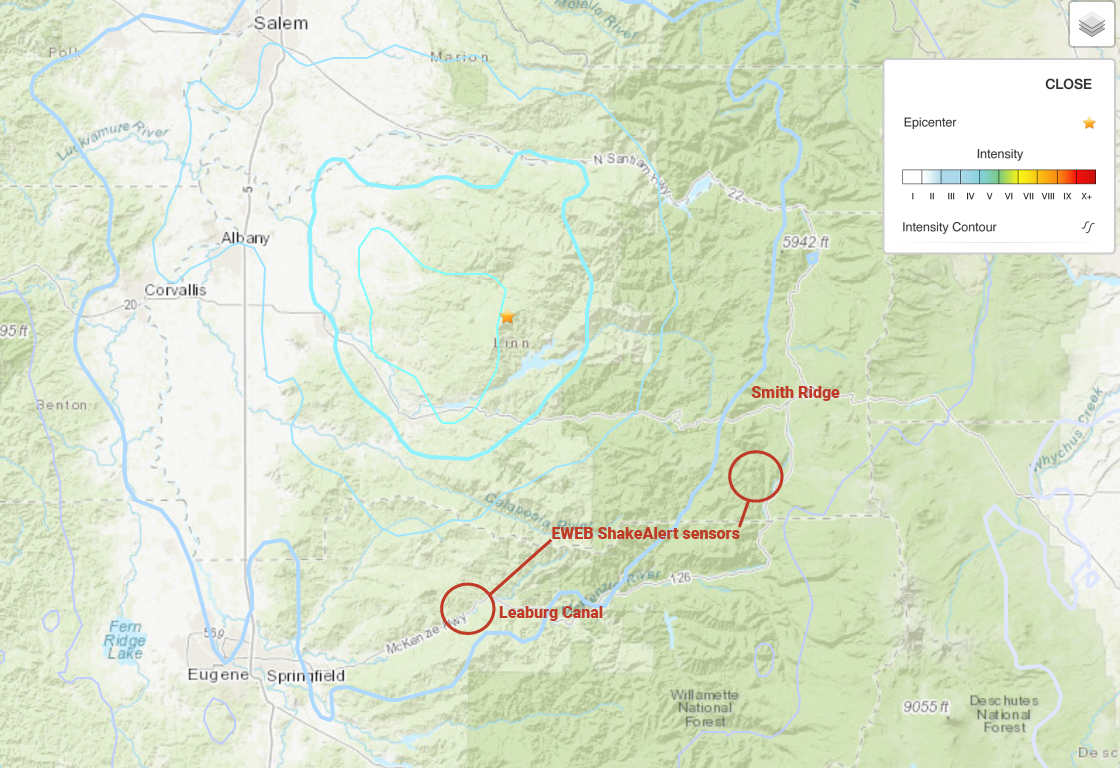 “We monitored the situation and ShakeAlert did exactly what we wanted it to do, but this event did not meet the threshold for public communication, which is 4.5 magnitude and above,” said Robert de Groot, ShakeAlert Coordinator for Communication, Education, Outreach and Technical Management.

With today’s Great ShakeOut drill as an inspiration, it’s a great opportunity to talk about earthquake preparedness with your family. Do you know the Seven Steps to Earthquake Safety? Take a moment to secure your space, plan to be safe, organize supplies, and minimize financial hardships before the next big one shakes things up for real. EWEB’s Pledge to Prepare program is a good starting place for all kinds of emergencies.