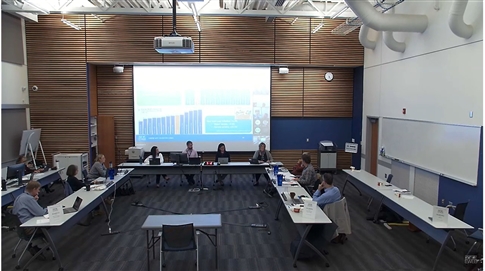 At the Nov. 1st board meeting, EWEB Commissioners got an update on the budget and rates for next year and the EWEB quarterly report.

EWEB staff presented their proposed budget for 2023. It includes a 4% electricity rate increase and a 6% water rate increase for residential customers. These are to address increases in cost of service and fund several major infrastructure projects, including upgraded water storage and a new water treatment plant on the horizon.

The board is scheduled to have another 2023 budget hearing in December during which our customer-owners are invited to provide testimony on proposed adjustments. 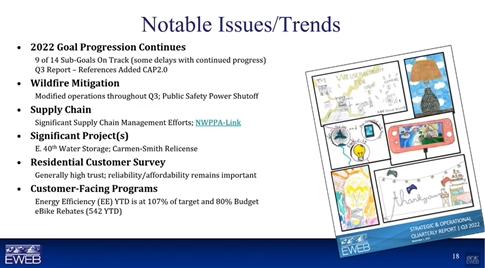 EWEB staff has had to plan around supply chain issues over the past months, which have created delays and higher costs for projects.

“I do have to compliment really, not just our procurement staff, which has done a really good job of mitigating that, but also the people who work and schedule and plan activities in operations,” said EWEB General Manager Frank Lawson, “We’ve had to shuffle a lot of those projects around to accommodate where and when and how we can manage materials through that.”

EWEB continues to make progress on new, seismically-resilient water storage near E. 40th and Patterson St. . Lawson said on his latest visit to the site, he observed the foundation had been laid for both tanks.

“When I was out there the other day, almost a circumference completed on the tank to the east,” Lawson said. “And it’s very impressive. Very large. And will serve the community for many years.”

In the 3rd Quarter, we also got the results of an in-depth customer survey, which asked customers to prioritize utility programs and initiatives. More than 1,000 surveys were returned, and the majority of respondents (74%) reported they have high trust and confidence in EWEB. Reliability and affordability are the top priorities when it comes to EWEB’s core services.

EWEB continues to make progress on our customer facing programs, including energy efficiency work which is at over 100% of target and under budget, with nearly 350 residential and business efficiency projects completed year-to-date and 5,000 megawatt hours of energy saved. EWEB’s E-Bike rebate program has been popular with customers with more than 540 customers receiving the $300 rebate so far this year.

EWEB’s 2022 Organizational Goals have shown good progress with 10 of our 14 goals and sub-goals on track. Goals with longer term advancement include developing a policy on diversity, equity, and inclusion, permitting and planning for the Willamette Treatment Plant, development of the Electric Master Plan, and sale of the EWEB riverfront headquarters building.

EWEB General Manager Frank Lawson shared the news that NW Natural withdrew their application to the Oregon Public Utilities Commission to build a 1 MW electrolyzer on property next to EWEB’s Roosevelt Operations Center. The electrolyzer would have produced green hydrogen that NW Natural planned to blend into natural gas pipelines serving homes in West Eugene. In withdrawing their application, NW Natural said they want to engage with the community more before they move forward.

EWEB Commissioners are elected and serve as volunteers. Their meetings are open to the public. Customers and the general public are welcome and encouraged to attend in-person or view the live stream.  Learn more at eweb.org/board.