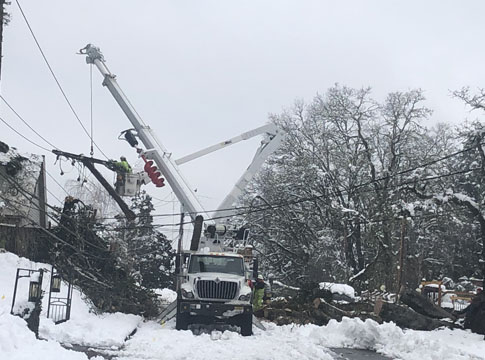 Following the 2016 ice storm, we applied for grant funding from the Federal Emergency Management Agency to make resiliency improvements to our electric system to reduce the frequency and duration of storm-related outages in several areas prone to storm damage.

FEMA tightly controls how such grant money is spent, and our distribution engineering staff spent a great deal of time refining the projects and tailoring them to meet the agency's stringent requirements. Those efforts paid off when FEMA approved almost all of the projects in late 2017. Design work started last year.

The agency has thus far approved 15 of the 16 proposed reliability projects, and will fund 75 percent of the cost, estimated to be about $3 million. The final project should be approved later this spring. Click here to view a brochure and map of the projects.

A dozen of the reliability projects will involve reconfiguring older overhead power lines that now have two wires and replacing them with new, higher-capacity cable that requires only one wire. This will also allow for the removal of crossarms, which are susceptible to falling trees and limbs and a common culprit in an outage. Replacement of damaged crossarms is time-consuming and slows restoration efforts. In addition, some lines may be rerouted.

Four of the reliability projects will convert overhead lines to underground service. Some areas where undergrounding will occur include Blanton Road and East 50th Avenue between Willamette and Fox Hollow. We will hold public meetings to explain the projects and gather comments from those in neighborhoods where overhead to underground conversations are planned.

Most of the overhead projects that involve reconfiguring and replacing lines and removing crossarms will begin in the late spring of 2019. The underground conversions will take place in 2020 and 2021.

One of the questions we receive after winter storms damage the system by bringing down trees and overhead power lines is: Why doesn't EWEB put more power lines underground?

The explanation is a bit complicated.

Those estimates do not include the cost of negotiating easements on private property, nor the cost of the ground transformers that would be required. And it is the customer's responsibility to pay for converting to an underground meter base that connects to the house.

There also is additional cost to repair fences and landscaping after the underground work is completed, and some property owners don't want us digging up their backyards, or placing pad mount ground transformers in their front yards.

New developments already incorporate underground utilities during construction. When underground lines are installed as part of a new subdivision that is not already encumbered by buildings, streets, sidewalks and other infrastructure, it is much less expensive. Plus, the developer covers those installation costs.

While undergrounding electric lines tends to protect them during ice and snow storms, the lines can be difficult and time-consuming to repair when the underground cables fail.

When considering whether to underground power cables in areas that sustain significant damage when snow and ice bring down trees and lines, we consider the safety and reliability benefits against the costs.