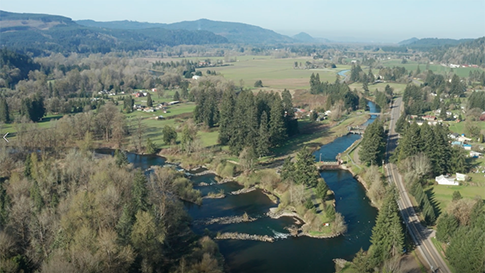 EWEB Generation staff on May 13 started diverting less water into the Walterville Power Canal to increase McKenzie River flows in the bypassed reach of the river to improve fish migration and water quality.

Under our federal operating license, the Walterville hydroelectric project is allowed to divert up to 2,577 cubic feet per second (cfs) into the canal during normal operations. The license requires us to maintain minimum instream flows of 1,000 cfs in the bypassed reach of the McKenzie at all times. We typically try to keep instream flows at around 1,200 cfs.

However, in 2018 we made an operational decision to voluntarily adjust the flow going into the Walterville Canal during low flow years in order to maintain 10% more flow in the river than the canal from June through October. Maintaining more flow in the river than in the canal improves fish migration and enhances water quality and recreational use during the summer months.

With the unseasonably warm and dry conditions this spring, and with adult salmon already present in the McKenzie River, staff made the decision to keep more water in the river immediately. We originally planned to begin diverting less water to the canal on May 20 due to the low flows.

"We decided to put more water in the bypassed reach of the McKenzie River at this time because we are hearing anecdotally that adult Spring Chinook are showing up a bit earlier than usual," said EWEB Generation Manager Lisa Krentz. "This will have a minor financial impact, but with the low river conditions we're experiencing, we felt it was the right decision."

This is the third year EWEB has voluntarily decreased diversion into the canal to maintain an additional 10% more flow in the river. This "low-flow" operation will continue through October.

The Walterville powerhouse, located off Camp Creek Road northeast of Springfield, can generate about 8 megawatts of electricity, enough to power approximately 4,000 homes or roughly equal to about 3% of Eugene's average daily consumption of electricity.