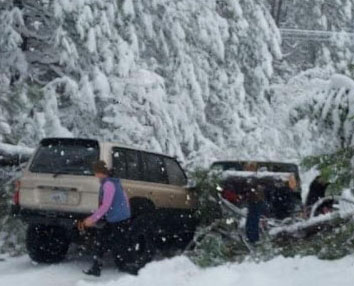 Two Eugene Water & Electric Board line crews will spend the New Year holiday weekend through next week restoring power to thousands of Pacific Gas & Electric customers in northeast California after winter storms dumped more than 10 feet of snow in the Lake Tahoe area starting before Christmas.

PG&E reached out to EWEB and other Pacific Northwest utilities for help after the heavy snow brought down thousands of trees, power lines, and power poles, which severely damaged the electric system in the Sierra Nevada foothills.

PG&E estimated more than 65,000 customers were without power at the height of the storm, but the frequency of restorations is increasing as more utilities arrive to provide mutual aid. The EWEB crews and equipment are based in Placerville, Calif., about 90 minutes west of Lake Tahoe, and 90 minutes northeast of Sacramento.

In Placer County, about 7,400 customers are still without power, and in neighboring Nevada County, there are more than 16,000 customers without power. Crews report that many roads are impassable due to heavy, wet snow and the many downed trees.

EWEB crews left for California on Thursday morning and arrived late that evening. On Friday, the nine line technicians from Oregon started repairing the damaged pole, cross-arms and transformers, in addition to putting power lines back up in the largely rural area.

“There comes a time in the history of all utilities when we are in need and when we are needed,” said Karen Kelley, chief operations officer for EWEB. “We are proud to be able to respond in times of crisis like what is happening now in Northern California.”

Kelley noted that several crews from Oregon and Washington helped EWEB restore power to customers in 2019 after a February snowstorm brought down hundreds of trees and left thousands without power, and also following the 2016 ice storm that caused power outages for 20,000 customers.

“We are also eternally grateful to receive assistance like we did in the snowstorm of 2019 and the ice storm in 2016,” she said. “We will continue this proud tradition whenever our time and resources allow.”

Before agreeing to send the two crews along with a general foreman and equipment, EWEB managers first reviewed weather forecasts and determined there was little chance of damaging snowfall over the next week. Once the two crews assembled from volunteers were headed to Northern California, other line technicians stepped up to be on-call through the holidays to make sure EWEB customers who may experience a power outage could be quickly restored.

EWEB crews have responded to several calls for aid from PG&E over the years, most recently following the devastating Camp Fire, where they helped rebuild the electric system in Paradise, Calif.

The crews expect to remain in Northern California through Jan. 6, unless more snow falls.