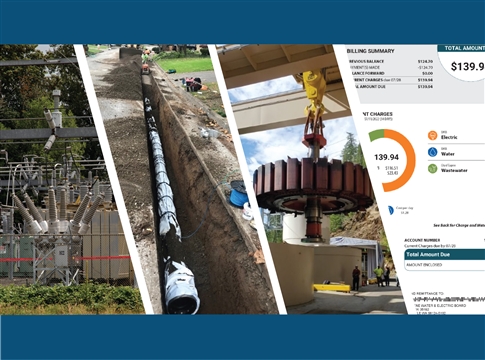 “With over $1 billion in assets at EWEB, how do we know we're working on the right ones?”

“The answer is planning, and lots of it,” said Karen.

The July meeting kicked off a multi-month planning process that will culminate in December with adoption of a 2023 budget and rates for electric and water customers.

In 2022, residential rates increased for the first time in five years. Looking ahead, a variety of long-term critical projects coupled with short-term supply chain and inflationary pressures and a dynamic power supply market are likely to impact the prices customers pay for water and power.

The cost for EWEB to purchase power and bring it to Eugene represents a significant portion of the electric utility's budget—almost 40 cents of every dollar in your EWEB bill goes to purchased power costs. We generate around 20 percent of the community's power using EWEB-owned or co-owned resources, and the remaining 80 percent comes from Bonneville Power Administration, other power purchase agreements, and wholesale market purchases. In the 2022 budget, purchased power costs were $21 million higher than the previous year.

EWEB plans for major infrastructure investments through our Capital Improvement Plan (CIP), a 10-year plan for rehabilitating, replacing, or installing new infrastructure and spreading the costs over many years to avoid having to raise rates significantly in any one year to pay for those improvements.

“The 10-year capital plans are updated annually to meet our customer expectations on the stewardship of their resources,” said Karen Kelley. “We must consider employee and public safety, consequence of equipment failure, probability of failure, current condition and operability, anticipated future condition, customer demand and load both present and future, regulations and compliance, and life cycle costs, all while leaving flexibility to address emergent needs and much, much more.”

To meet the current and future needs of our community and ensure reliable service, some of the projects we are planning and budgeting for include:

Although these are long-term, multi-year projects, the planning work is impacted by current economic conditions. Early projections for next year’s budget indicate $102 million in spending for capital projects, an increase of about $18 million over 2022 projections, primarily due to inflation and supply chain impacts.

The July meeting was the first in a series of public meetings during which your elected Board of Commissioners will provide feedback and direction on spending for major capital projects and potential price changes for customers.

Summer through fall, EWEB staff use direction from the Board to develop a proposed spending budget for the following year. With the exception of funding for large infrastructure projects, EWEB aims to keep rate increases in line with general inflation.

The final budget is adopted in December following public hearings during which our customer-owners are invited to provide testimony on any proposed adjustments. The first public hearing on the upcoming budget is scheduled for Oct. 4, 2022.