As a customer, you receive a monthly bill for your energy and water usage. If you have a smart meter, your usage information is automatically transmitted to EWEB using a low-power radio over a secure wireless network. If you have a non-communicating meter, our meter readers physically collect the energy and water usage information needed to calculate your bill each month.

While it is EWEB's intention to read every meter each month, there are occassions when we need to estimate a customer's usage due to various circumstances such as weather, technical difficulties, complications accessing the meter, or due to changes in staffing.

Like many other businesses and utilties, EWEB is facing a labor shortage that has impact our meter reading department. You may have noticed that EWEB has expanded our use of meter read estimations. If we are unable to collect the actual meter read, standard business practice is to calculate an estimate of the amount of energy and water you used in that billing period. Although the frequency of estimations has temporarily increased, they are not new. Utilities often use estimations when they are unable to get to an actual read of a meter.

How does EWEB estimate usage?

The meter on your home works like the odometer in your car, counting energy in kilowatt hours (kWh) and water in kilogallons (kgals). EWEB reads the meter and then subtracts the previous meter read to determine your usage for the month. All meter reads are printed on your bill. 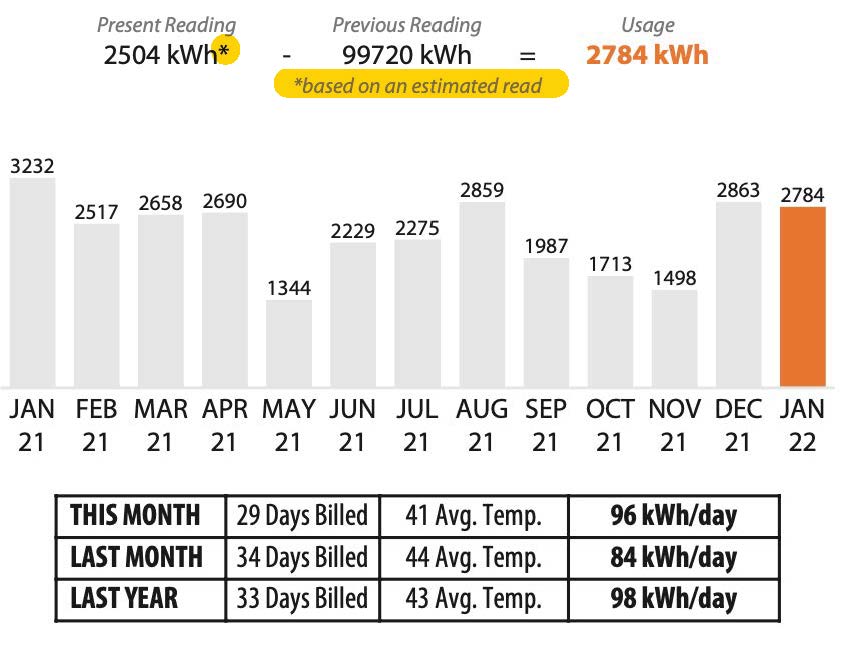 If your bill does not indicate it is an estimated bill, it may be the corrected (true-up) bill. You can verify this by looking at your previous bill to see if it inidicates that it is an esitmated bill.  The true-up bill is based on your actual meter read, when we correct any difference between your actual and estimated readings.

Have more questions about estimated bills? Check out our FAQ for more information.