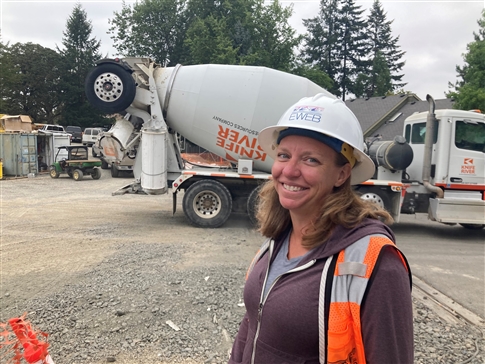 Laura Farthing didn’t always know she wanted to be an engineer. But when a man in rural Kenya told her he’d only install a water spigot for an orphanage if she agreed to marry him, she realized she could do his job.

Farthing volunteered at an orphanage between Kenya and Nairobi after graduating from the University of Oregon with a BS in Environmental Studies.

Farthing said the women in the village spent hours each day walking miles to get water for their families because there wasn’t nearby access to safe drinking water.

Farthing refused to marry that Kenyan water engineer. Instead, she returned to Oregon and got her master’s degree in civil engineering at Oregon State University.

“Well, I know it changed my life forever. I mean, it's how I got into engineering, in the first place.”

Farthing said access to safe drinking water can bring women out of poverty, but in many parts of the world, that’s not a reality. Here in the U.S., it’s easy to take accessible drinking water for granted.

“And I think it's one of the more amazing things we have in this country that for the most part, you can go anywhere, drink the water, and it's safe,” said Farthing.

EWEB customers are uniquely fortunate to get our drinking water from the pristine McKenzie River. It’s treated at Hayden Bridge Filtration Plant and then piped to several reservoirs in Eugene. The city’s reservoirs are aging and no longer meet seismic or health standards.

Farthing has been working for EWEB for the past 14 years. She’s the lead engineer on EWEB’s water storage construction project near E. 40th and Patterson St.

“These tanks will have the ability to provide water to all of EWEB’s about 180,000 customers,” Farthing said.

She’s managing the construction of two 7.5-million-gallon tanks on this 10-acre property. The new tanks will provide seismically resilient drinking water storage for Eugene and make it possible to replace aging infrastructure in other areas of the community.

“Their lifespan, it’s replacing the College Hill Reservoir which has been in place since 1939, so these are big legacy projects that could potentially be here for 100 years,” said Farthing.

The state has ordered EWEB to replace College Hill Reservoir due to its seismic issues. Knowing that replacement storage would eventually be needed, EWEB purchased the 10-acre property near E. 40th Ave. and Patterson St in the 1950s specifically for this use. Approximately 2.5 acres will be used for water storage and the remainder of the property will remain open to the public. Habitat will be restored or enhanced to support a diverse community of native plants and animals.

“We worked with a team of ecologists and our arborists. And we really paid attention to where we sited the tanks,” said Farthing.

The oak savannah and woodland habitat have been preserved and the plan is to improve the area for oak health.

“We tried to fit and blend in with the natural environment as well as creating large infrastructure that will support the health of the community for the long term. Which has been  fun to show that you can build  large infrastructure next to native oak savannah and still protect it and make it all work together.”

She said many of the trees they removed were unhealthy or dying. Fir trees are not drought tolerant; preservation of oak savannah is more sustainable in the long term.

Farthing’s supervisor, Wally McCullough has worked with her at EWEB and previously at a consulting firm. He said she’s risen to the many challenges of this project.

“It’s a big project and it had a lot of challenges that Laura overcame. I mean, she's done a great job and she deserves a lot of recognition for it,” said McCullough.

McCullough said Farthing has faced  challenges, being a woman in a male-dominated field. He remembered a time Farthing was  meeting with someone about the water storage project when they interrupted her and said they wanted to talk to the person in charge. “Oh, I want to talk to the engineer. I want to talk to him. And he pointed to me because I was the white male.”

Does Laura Farthing still think about those women in Africa walking 10 miles a day to get water? Yes. She’d like to go back someday to help build water infrastructure. But for now, she’s busy with two young sons and a major infrastructure project here in Eugene that will serve the community and provide safe, reliable water for generations to come.