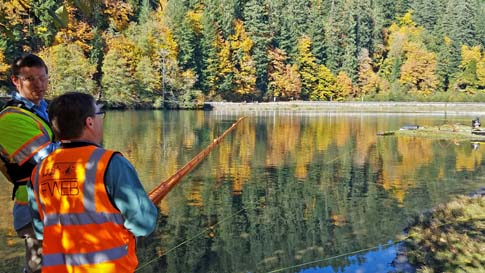 More than 30 emergency responders from multiple local agencies conducted a live "spill drill" in late October on the McKenzie River above Leaburg Dam.

Participants practiced containing a fictitious fuel spill using the McKenzie Watershed Emergency Response System (MWERS). They set up fast-water containment booms, deployed oil recovery equipment and performed other tasks to minimize the spread of the oil in order to protect the McKenzie River, which supplies drinking water to the nearly 200,000 residents of Eugene.

The joint drill was primarily organized by the EWEB, McKenzie Fire & Rescue and the Eugene Springfield Fire Hazmat Team to familiarize first responders with MWERS. Other agencies included the Springfield Utility Board, the city of Springfield, the Lane County Sheriff's Office, the U.S. Forest Service, and the Corps of Engineers.

"Interagency drills like this are extremely valuable because it allows us to refresh and hone our skills in deploying spill response equipment that we rarely have the opportunity to use and then test these pre-planned response strategies," said Karl Morgenstern, EWEB's Source Protection Supervisor.

Refreshing those skills required to quickly and efficiently deploy the booms is something all the agencies agree is important to do on a regular basis. While some are familiar with the process, boom deployment is complicated even during good weather, so having time to practice together as a team improves the likelihood of success during an real spill event.

"The real value is working together so we know each other and we know the resources and skills each agency can bring to a response before we all show up at an actual incident," Morgenstern said.

Responders were reminded of the precarious position of the McKenzie River in relation to Highway 126 last June, when a tanker truck carrying about 11,000 gallons of gasoline crashed on the highway about one mile east of Leaburg. The crash occurred just 1,500 feet from the river. Fortunately, none of the roughly 1,700 gallons of fuel spilled entered any of the river's tributaries.

The MWERS emergency response system was created in 2002 by EWEB and McKenzie Fire & Rescue Fire to assist first responders in the event of a hazardous materials spill or other emergency that threatens the water quality of the McKenzie River, Eugene's sole source of drinking water. The system uses detailed mapping and computer technology to give emergency crews information and instructions for containing spills in specific segments of the river. In addition, three fully-equipped interagency response trailers are staged throughout the McKenzie Watershed for rapid response to a spill.