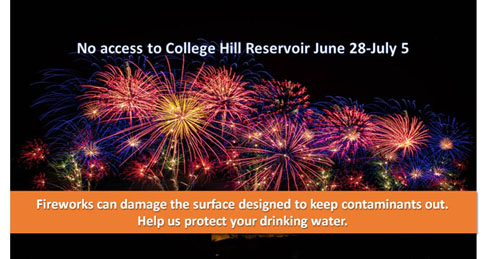 To help protect drinking water, we will continue the ban on fireworks at College Hill Reservoir, and will restrict all access to the reservoir June 28 - July 5.

The fireworks and access prohibition includes the entire surface of the reservoir, located at Lawrence Street and West 25th Avenue. However, legal fireworks can be used on the blacktop surface of the old reservoir to the north of the College Hill structure.

"I am confident our community will be especially vigilant in helping us keep our water safe," said Jason Carman, EWEB's pumping and controls supervisor. "Closing the top of the reservoir to avoid fireworks damage may be inconvenient for some, but is in the best interests of all."

People and pets can pose risks to drinking water

Since the reservoir started operating in 1939, Eugene residents have used it and the surrounding open space as an unofficial park for picnics, star-gazing and bicycle riding. EWEB considered fencing off the reservoir over the past decade because of security and contamination concerns. To maintain public access, we invested more than $1 million on improvements that include joint hardening, slab sealing, head house fencing, installation of electronic surveillance and landscape security improvements. In 2012, we determined that despite the improvements, the roof of the reservoir was still prone to leakage.

Concerned over possible contamination of the water supply from dog feces left atop the facility, we approached nearby residents to find a solution. Working with neighbors over the past several years, we installed access gates and larger signs asking people to keep dogs off the reservoir to protect against potential contamination. The partnership with neighbors has led to a largely successful effort to keep dogs and dog waste off the reservoir.

EWEB staff and neighbors will continue monitoring the reservoir to make sure people are respecting the temporary closure, as well as the prohibition of dogs and the fireworks ban.