How EWEB uses anthracite coal to filter your water 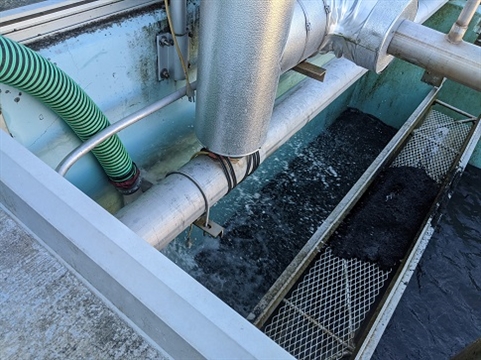 No, EWEB isn’t on Santa’s naughty list. And, no, EWEB is not switching to coal-fired power – our electricity is approximately 90 percent carbon free and comes largely from hydropower.

This very pure form of coal called anthracite coal is actually used as part of the water filtration process. In this process, coal actually makes the water cleaner by acting like a sponge that traps particles.

The water that EWEB sources from the McKenzie River is already very clean. But we still need to treat it at the Hayden Bridge Filtration plant to remove impurities and ensure your drinking water is safe.

“They take a 3,000-pound sack of coal,” Sayles said. “They bring it over on the forklift, put it up over the hopper. They pull a ripcord and the media starts dropping out of a chute into (a narrow, high-pressure tube that creates suction so water and coal move through the hose) and then they pump the media up into the filter.”

Because summer is the peak season for water use, plant operators want to avoid taking too many filters out of commission during this process. So, they’re taking a few days to add the coal to each filter.

“The particles are way too small to be filtered out,” Sayles said. “They're too small to settle out in the sedimentation basins. So, what we do as operators, we turn little particles into big particles. That way, our filters can handle the load and filter it out.”

The coal brings those particles with it as it settles at the bottom of the filter under a layer of sand. Then the filtered water is pumped out to Hayden Bridge’s 15-million-gallon covered reservoir to be disinfected.

Plant operators learn how to do everything at the plant so they can troubleshoot and know what to do if anything breaks. The overlapping skillsets ensure that problems are fixed quickly. At the same time, some staffers have been at the plant long enough to see it evolve into a digitally driven operation.

“That's a big key and it always has been,” Sayles said. “This generation of operators, we we've seen this place go from pulling levers to poking buttons. ”

Everyone who works at the plant takes pride in what they do.

“And they think of every drop of water that leaves,” Sayles said. “Here it's going to baby's formula. It's going into these hospitals. That's what our operators’ mindsets are. And each and every one of them that are here at Hayden Bridge, they have that same thought process, and they go the extra mile.”