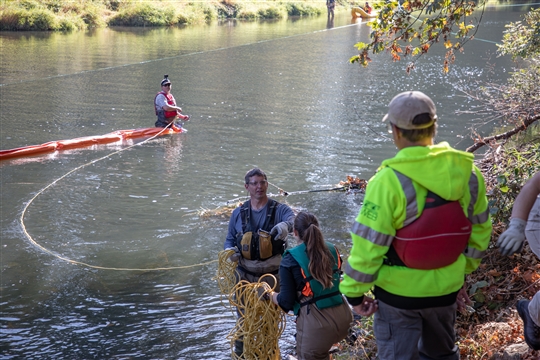 EWEB  conducted a multi-agency spill drill on the Willamette River this week.  The practice session was to help refresh and hone skills that will be essential to respond to an actual disaster involving an oil spill in the Willamette.

Emergency responders gathered at Whitely Landing in North Eugene on a sunny morning.

“Alright, hey, my name’s David Donahue. I’m an Environmental Specialist with EWEB. I think I know most of you but some new faces which is awesome to see. We actually have a great day. Hopefully, no smoke. But it should be good time to be out on the water.” Donahue spoke to the group before the exercise got underway.

The practice scenario for the drill was that used oil had spilled into the Willamette upstream of the Whitely Landing from the I-105 bridge.

“Oil spills on fast-moving rivers or water is really a complex thing to try to stop and to clean up,” said Karl Morgenstern, EWEB’s water restoration program manager.

Morgenstern launched the spill drill program around 2003 and has participated in annual spill drills ever since. He says the team uses ropes, pullies, and containment booms to direct the oil to an area where it can be collected. Then a skimmer is used to remove as much oil as possible.

“It’s a complicated response. We do this once a year and even then, you’re kind of relearning what you did last year,” said Morgenstern. “And the hope is that if there’s a spill in the year in between our drills that when we come together, we’re so much better and know what we’re doing together.”

The organizations that participated form a coalition called the McKenzie Watershed Emergency Response System. The group includes EWEB, the Army Corps of Engineers, Eugene Springfield Fire and EMS, Lane County Sheriff, McKenzie Fire & Rescue, and the Oregon Department of Environmental Quality, among others.

Nancy Toth with EWEB’s Source Water Protection said it’s really important to be able to respond if hazardous material get into the river.

The drill took place downstream of EWEB’s intake on the McKenzie River. There are downstream communities that rely on the Willamette River as a drinking water source, including Corvallis, Sherwood, and Wilsonville  EWEB is also planning to build a second water treatment plant on the Willamette River so that we’re not dependent on a single source of drinking water for our 200,000 customers.

Multiple agencies working together on disaster response can make a big difference in a real-time situation. Morgenstern said this type of multi-agency oil spill drill is unique in Oregon.

“This just doesn’t happen to be honest.” Morgenstern said.

After the spill drill was over, EWEB's David Donahue said he thought it was a big success.

"We enjoyed a strong sense of teamwork and support throughout the exercise.  We were also fortunate to have favorable weather, low river flows and good site access," said Donahue. "Although I’m hopeful we never have to face a major spill in a local waterway, I’m also grateful we have opportunities such as these to build relationships with other stakeholders, develop skills and test equipment in the field."