City and EWEB Reach Agreement on Sale of Riverfront Property 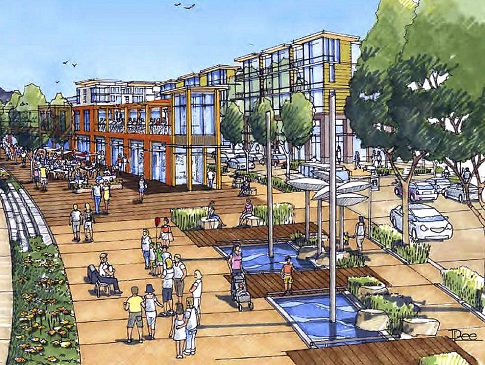 In April 2017, EWEB and the city of Eugene reached an agreement for the sale of the utility's riverfront property, marking a key milestone in the efforts to redevelop the site. The riverfront property holds enormous redevelopment potential, enabling acres of underutilized downtown property along the Willamette River to transition from industrial to a mix of uses that include residential, retail and office.

The transformation of the approximately 16-acre property is a critical piece in connecting Eugene's downtown to the Willamette River and creating an active place for the entire community. EWEB has done much of the groundwork to prepare the property for a different future, including adopting a site master plan with broad community support and rezoning the property to allow for mixed use development and a public park along the river's edge.

"This is a tremendous and long-awaited opportunity to transition the property from its industrial origins to a future that benefits the whole community," said EWEB General Manager Frank Lawson. "I'm confident that the site, even with its development challenges, can become a lively riverfront destination that supports the revitalization of the downtown and our overall economic prosperity."

The sale of the property for $5.75 million is a negotiated price based on two previous property appraisals. It does not include about 5 acres of property where the utility's headquarters, customer service center and associated parking is located, but does consider the level of public infrastructure investments needed to bring about the type of development envisioned. This includes a new riverfront park and an improved railroad crossing to access the property, among with other investments that improve connectivity from downtown to the river.

While the headquarters is not in play at this time, EWEB is actively involved in a planning process to consolidate staff at the utility's Roosevelt Operations Center in west Eugene to make the remainder of the riverfront available for sale and redevelopment.

EWEB decided to sell the riverfront property in 2013 after relocating our operations and engineering functions to the better situated location in west Eugene. After the initial developer backed out of property sale negotiations in 2015, EWEB asked the city to take a lead role in negotiating sale of the surplus property. In July 2016, the Eugene City Council authorized the city manager to negotiate the outright purchase of the surplus property.

"The agreement with the city is the best path forward to realize the community-supported Master Plan vision and enables EWEB to focus attention on our core mission—reliable electric and water service," Lawson said. "I share the community's eagerness to see redevelopment get underway soon, and I'm confident that the city is best suited to work directly with private developers to make this project happen."

A webpage is now available on the city's website—www.eugene-or.gov/riverfront—with information regarding the redevelopment, including a new video highlighting the project.

EWEB will complete remaining environmental remediation work over the next several months. We share the community's interest in high quality development along the river in an environmentally responsible way, and look forward to seeing a legacy project emerge on this property that we can all be proud of for generations to come.