Ospreys feed almost exclusively on fish and that means nesting close to rivers and lakes. Additionally, ospreys prefer a nest with a view—the tallest and least-obstructed power pole will do nicely.  EWEB has approximately 3,200 poles within a quarter-mile of the McKenzie and Willamette rivers, and that requires a proactive approach to accommodating these tenacious nest-builders. 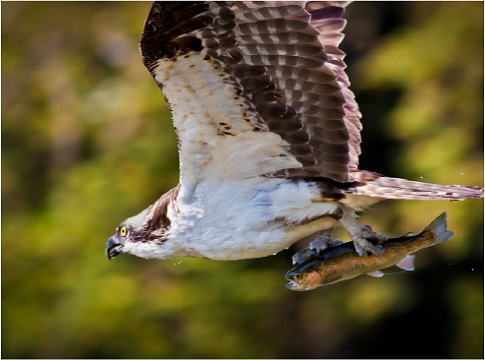 Osprey nests built atop power poles can cause fires and outages, as well as increase electrocution risk for the birds. Complicating the problem is that the birds remain committed to their nest site year after year, which can lead to very large nests that exceed the weight capacity of the pole and create an unstable nest.

Those nests can also accumulate plastic debris, such as fishing line, that presents an entanglement hazard to the birds. In 2013, a baby osprey became tangled in fishing line and was rescued by EWEB crews and Cascade Raptor Center staff after falling from its nest.

To protect the birds and reduce the risk of electrical outages, EWEB electric crews and environmental staff regularly monitor and evaluate nests.

We have many tools to manage our electrical system and accommodate safe use by osprey.

If a nest is determined to be at risk, EWEB manages the nest in accordance with state and federal laws. Corrective and preventive measures might include removing uninhabited nests, cleaning out nests to reduce their size, relocating nests, installing goose decoys as deterrents, or building nesting platforms.

As of 2020, EWEB has built 30 osprey nesting platforms throughout our service territory, some on existing power poles and some as standalone structures. During our most recent annual assessment, we found that 22 of the platforms are actively in use.

To report a nest, email us and include the following information:

When EWEB receives a report of a nest, crews follow all federal and local wildlife regulations while assessing whether the nest is inhabited and if it can be removed or relocated.

For more information about osprey and power poles, check out this article published by the Audubon Society: As Ospreys Recover, Their Nests Are Sparking Fires and Power Outages

Photo credit: Pictures of osprey in flight with fish in talons, and osprey against the blue sky were taken by local photographer Quentin Furrow at Alton Baker Park.