The McKenzie River is the lifeblood of Eugene, providing citizens with high quality drinking water and a reliable source of electricity since 1911. EWEB owns and operates two hydroelectric projects on the McKenzie River: Leaburg/Walterville and Carmen-Smith. 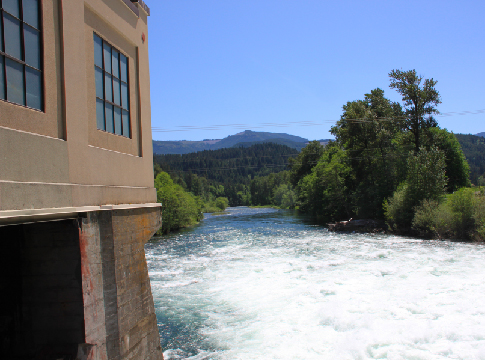 The Leaburg/Walterville Hydroelectric Project is actaully two plants on the lower McKenzie River. The projects are "run-of-the-river" developments, meaning that the natural flow and elevation drop of the river are used to generate electricity.

The Leaburg Dam is a reinforced concrete and steel structure that diverts water into a power canal for use in generating electricity farther downstream at the Leaburg power plant. The dam, which uses roll gates to control the flow of water into the  canal,  is equipped with fish ladders. A bridge located on top of the dam provides access to a state fish hatchery, Lloyd Knox Park and several private residences on the river's left bank.

The annual output at the Leaburg power plant is enough energy to power over 8,000 Eugene homes for a year.

The Walterville plant includes a headworks with a fish screen, power canal, forebay, penstock, power plant, substation, tailrace, fish barrier, and fish return channel, but does not include a dam. A portion of the water from the McKeenzie River is diverted via rock formations known as chevrons into a power canal that originates on the McKenzie River's right bank and flows westerly to the forebay. From the forebay, water flows into the Walterville Powerhouse containing a single turbine connected to a generator.

The annual output at the Walterville power plant is enough energy to power over 5,000 Eugene homes for a year.

The Carmen-Smith Hydroelectric Project is located 70 miles east of Eugene on the upper McKenzie River. For more than 50 years, Carmen-Smith, our largest utility-owned generating facility, has reliably served our customers with low-cost hydropower. The plant remains valuable as a carbon-free generation resource that can ramp up and down to meet customers' peak energy needs. In other words, the Carmen Smith Project operates as a system to store water overnight, and produces power during high usage times when we would otherwise be buying it on the wholesale market during those more expensive hours.

Carmen-Smith is a network of three dams and reservoirs and two power-generating plants located just a few miles downstream from the headwaters of the McKenzie River.

In 2019, we received a new 40-year federal operating license. We are in the process of implementing the commitments made in the new license and upgrading our infrastructure and recreational amenities. For more information, go to our relicensing page.