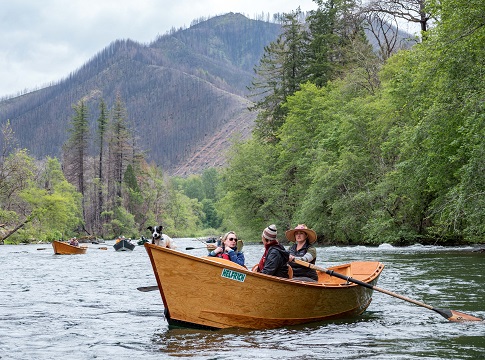 EWEB Commissioners joined local representatives on a float down the McKenzie River to learn about the many Pure Water Partners watershed restoration activities following the Holiday Farm Fire.

Eugene Mayor Lucy Vinis, Oregon State Representative Nancy Nathanson, and Lane County Commissioner Heather Buch were among the local leaders who made the trip. Each shared their feelings of remorse as they were impacted by witnessing the scale of the fire's devastation.

"You know, I'm in a little bit of emotional turmoil seeing it. I mean, you see the devastation on the hillsides—and then you see the soft greenery that is coming up: the alder trees by the river and the grasses, and so this contrast between the new growth and the devastation is just—it's haunting, actually," Mayor Vinis said.

The tour began at Finn Rock Reach, a two-mile stretch of the river where EWEB helped the McKenzie River Trust purchase the land in 2016 to manage it for conservation. Morgenstern, Moll, and Weybright explained how reconnecting floodplains to the McKenzie River helps manage flood control, provides native trout and salmon with spawning and juvenile rearing habitat, and creates wetlands that serve as carbon sinks.

"When I see the partnerships that are coming together to try to help this place come back to what it was, this is about saving our water and saving our watershed, and even though it's been sad and somewhat takes my breath away to look at what happened because of the fire, it's also so uplifting to hear about the partnerships that immediately rejoined and came together to start helping this place come back, to help the ecosystem be restored as quickly as possible," said Representative Nathanson, who represents Eugene north of West 11th Avenue.

Helfrich River Outfitters had ten McKenzie River drift boats ready for the group to put in at Finn Rock. Along the way, Ken Helfrich shared stories of how his great-grandfather, Ben Helfrich, built cabins along the river in 1914.

"There were four cabins in here that [my great-grandfather] built. They called it "Halfway," because it was halfway between Eugene and the top of the McKenzie Pass. And people that came up the river in those days would stop in here and spend the night. And some of them would fish, and this is actually how my grandfather got started as a guide because he had this lodge here and they would take them out on fishing boats," he said. "They would have their guests come to their house for dinner, so they'd feed them right there at the family table."

Sadly, the old Helfrich cabins burned down in the Holiday Farm Fire. Ken Helfrich said it might be for the best, however, as the cabins and their septic tanks were too close to the waterway that provides 200,000 people their drinking water.

"It's kinda hard to see them go away, but on the other side, they were here in a place where they probably shouldn't have been. When they were originally built, there were hardly any cabins or houses along the river, but now for them to be having septic effluent going into the river, it's not a good thing, and it's pretty hard to avoid that when you're that close to the river," he said.

The tour made many stops to showcase restoration activities, including at Quartz Creek, where the Pure Water Partners are working with the timber company Campbell Global to conduct floodplain restoration using FEMA funds for water quality and ecological benefits. Below the iconic Eagle Rock—now surrounded by gigantic, charred trees—Morgenstern explained how EWEB is working with landowners to help them rebuild while reducing the impact of development, like installing erosion control measures.

"The Pure Water Partners team has been doing erosion control you know basically from the time the ground cooled. They started very quickly getting out on properties," EWEB Commissioner Matt McRae said. "There's a lot of stuff here, it's just quietly sitting on the side and slowing down water. You wouldn't notice it unless you are looking for it, which is good to me. It should be doing the work but not blocking the landscape."

After the group passed through Marten Rapids, they stopped for a presentation from Morgenstern, EWEB Water Resources & Quality Assurance Supervisor Susan Fricke, Environmental Specialist Nancy Toth, and Business Line Manager Anna Wade for a more comprehensive overview of EWEB's outreach before the fire and new programs to mitigate the effects post-fire.

Throughout the day, as invited guests developed a greater sense of all of the restoration work going on, they shared their enthusiasm for the Pure Water Partnership.

"The Pure Water Partners is a conglomeration of various people that really are concentrating on how to rebuild and be able to help that natural environment," Lane County Commissioner Buch said. "This is an independent agency with people who are dedicated to rebuilding the river and wanting to help folks rebuild their land."

If your property is affected by the Holiday Farm Fire and would like to learn more about how the Pure Water Partners can support restoration work, please visit our Holiday Farm Fire Resources and Support page.