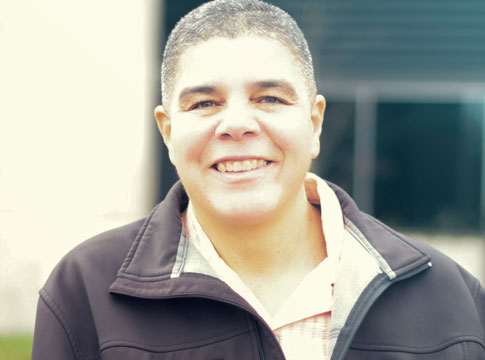 As Lisa's career with EWEB enters its final stage, there's something almost fated about it.

Over 28 years ago at the encouragement of a friend, Lisa first met with an EWEB HR representative who was interested in recruiting more women to apply for trades positions at the utility. At the time, Lisa was working in the timber industry as a heavy equipment operator and knew she didn't want a career working in mills. She started keeping her eye out for positions with EWEB.

Her foot in the door was as a temporary employee in meter reading. From there, she moved into a utility worker position. "I spent ten hours a day on the end of a weed eater upriver," says Lisa.

Following were a variety of limited-duration positions in landscaping, meter reading and as a truck driver in the water division before Lisa landed in water construction as a meter mechanic. After a handful of years, she took her skills to the pumps and reservoirs team.

"That was a cool job," says Lisa. "I was one of three people operating the water distribution system. People don't think about it, because we do it successfully. During big power outages, everyone's focused on the electric side and we're running around town making sure we don't lose a reservoir-you need power to pump water. But no one thinks about it, because we've done our job and there's still water coming from the tap."

All along the way, Lisa found opportunities to encourage and support other women. She attended leadership trainings and was involved with the non-profit organization Oregon Tradeswomen, supporting women's participation in skilled trades. But the thing that seems to bring the most joy to her face is the work she did over the years to help organize hands-on career fairs for young people.

"There was this time when a girl got on a roller at one of the career fairs and when she first sat up there, she was, you know, a little slumped over." Lisa slouches in her chair to demonstrate. "A little like 'I don't know. Can I do this?' And then as she started moving the roller around a little she just kept sitting up taller and taller." And Lisa sits up taller and taller in her chair. "It made me teary watching her. Like I was seeing her gain self-esteem right in front of me," recalls Lisa.

As she nears retirement, Lisa has made her last position change with EWEB that has brought her nearly thirty years full circle. She's a Special Projects Coordinator working on diversity, equity and inclusion.

"My experience here has grown how I value people," says Lisa. "It's exciting to end my career in this role. I had all these skills grow while I was doing a technical job, and now I'm getting to use them. My passion is now for the workforce. If we can show up and feel like we belong, we serve customers better."

Lisa doesn't just belong at EWEB, she belongs in this final role at EWEB. And while we will be sad to see her retire in the coming months, we are proud of the work she has done and the positive impact she has had on so many people at EWEB and beyond.

Thank you Lisa for your role in providing customers with vital services 24 hours a day, 7 days a week, 365 days a year.