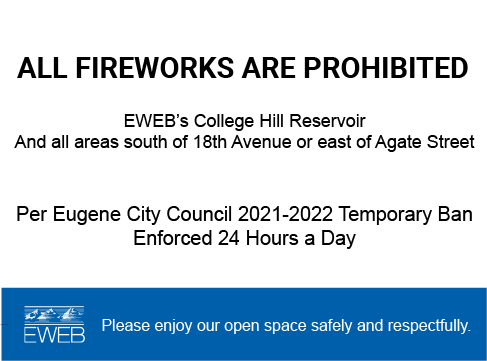 This year, the City of Eugene passed an ordinance banning the use of fireworks in a segment of south Eugene due to the area's drought conditions and the potential for wildfires. The city ordinance bans fireworks in areas south of 18th Avenue or east of Agate Street, which includes College Hill, through the remainder of 2021 and 2022.

The fireworks prohibition includes the entire College Hill water storage site, including the blacktop surface of the old reservoir to the north of the College Hill structure. However, only the surface of the south water tank will be closed over the holiday—EWEB will lock the gates to the surface Thursday morning, July 1 through Tuesday morning, July 6.

"College Hill reservoir is great for views of the city and friendly gatherings, but its primary function is drinking water storage," said EWEB Water Operations Manager Karen Kelley. "Water infrastructure is something most people rarely think about but protecting our drinking water is something that we all need to work on together. We can't take the safety and reliability of our drinking water for granted."

Approximately 80,000  people in Eugene rely on the 15 million-gallon (MG) College Hill reservoir for their drinking water.