Check out a detailed history  and many historic photos of EWEB, written by former employee George Mason.

A typhoid epidemic that struck Eugene in the first decade of the 20th century provided the catalyst that led to the creation of EWEB. When the outbreak was traced to the privately owned water company, outraged citizens sprang into action, voting in 1908 to buy the system and create a municipal, citizen-owned water utility.

The Eugene City Council ordered the construction of a hydroelectric power plant that would power the pumps necessary to ensure adequate water pressure. When the Walterville Hydroelectric Plant on the McKenzie River was completed in February 1911, the City Council transferred control of the utility to a separate citizen board, which met for the first time on March 11, 1911.

The Walterville Power Plant (still in operation today), which was built to power pumps for the water system, generated plenty of surplus electricity. At first, the city decided to power its streetlights. Then, a handful of businesses started buying power. The Eugene Planing Mill on Lawrence Street, currently the site of the REI store, was the first electric customer. In 1916, the board purchased the private Oregon Power Company's competing electric system, positioning the utility as the full-service provider it is today. 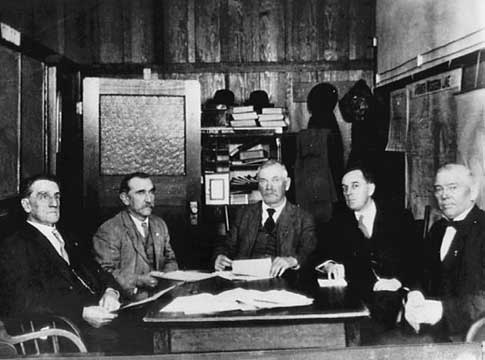 Some of our more important milestones:

1906: A typhoid epidemic, traced to the private water system, spurs citizen support for a public takeover of the private utility.

1911: The Walterville Power Plant is built, initially to power pumps for the new city-owned water system. The city transfers control of the system to the citizen-led Eugene Water Board. The Eugene Water Board meets for the first time on March 11, 1911.

1927: EWEB moves its source of water to the McKenzie River, from the Willamette.

1931:  To meet growing demands for power, EWEB builds a steam plant along the Willamette River.

1949: The utility's name is changed to the Eugene Water & Electric Board.

1970: Eugene voters approve a moratorium on construction by EWEB of any nuclear power plants.

1977: The first energy-conservation department is established, reflecting EWEB's growing commitment to energy efficiency. More than 42,000 Eugene homes have been weatherized since then under various residential conservation programs.

1980: EWEB assigns its share of the Trojan nuclear power plant to the Bonneville Power Administration. This move proves to be enormously beneficial financially, sparing EWEB customers the high costs associated with operating Trojan and its eventual shutdown in the early 1990s.

2010: EWEB moves into the Roosevelt Operations Center, which houses more than half of the utility's employees.

2011: We honor our centennial with events through the year, plus creation of special commemorative brews from two of our home-grown craft breweries, Ninkasi and Oakshire.

2012: After a few years of steady decline in steam customers, the utility decommissions the steam plant and prepares the historic building for repurpose as a part of the redevelopment of the riverfront.

2017: EWEB and the City of Eugene reach an agreement for the sale of the riverfront property, marking a key milestone in the efforts to redevelop the site.